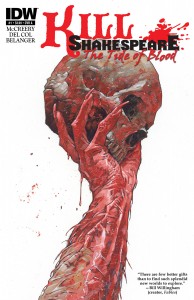 After their successful 12-issue maxi-series, Anthony Del Col, Conor McCreery and Andy Belanger return with the follow-up to their critically acclaimed comic book series, revisiting the world of Shakespeare’s greatest creations in Tide of Blood.

The story picks up three months after the initial story’s conclusion, the Prodigal forces led by Juliet and Hamlet having successfully turned away the armies led by Richard III and Lady Macbeth on the fields of Shrewsbury. With the first issue of Tide of Blood, Del Col and McCreery reintroduce the surviving characters — Hamlet, Juliet, Othello and Romeo — and plant them into a new dire situation where the dark forces of Shakespearean lore again threaten to topple the world created by its God — William Shakespeare.

Much of the first issue centres around the love triangle introduced inside the previous series placing Romeo and Hamlet at odds despite their necessary alliance. Although having worked together to defeat Richard, issue one of the new series reveals the depths of Romeo’s pain at the sight of Hamlet and Juliet’s blossoming love. Beginning with a tormented dream populated by visions of Juliet, Hamlet and Shakespeare, we find the vivid illustration of a seemingly broken man overcome by his personal demons, tortured by his perceived failings in this universe as a lover, fighter and servant to Shakespeare. Evidently abandoned in his eyes, Romeo is saved by a hooded female stranger who promises to come for him as he awakens from his slumber — next to a prostitute.

Awake, we find Romeo’s dreams playing out in reality, an interesting parallel between the real world and Romeo’s dream sequence. In the established social order of the Prodigals we discover Romeo’s place within their military ranks, albeit sullied by his downtrodden depiction and defeatism. It’s through his interactions with the principal characters where we find the inspiration for and source of his nightmares. His recession from sociability is made ever more clear through his interaction with Hamlet in the memorial garden, a scene which leads to a foreplay-esque series of pages between Hamlet and Juliet emphasizing how fargone his past relationship with Juliet actually is. It’s only during his deployment to a Shrewsbury outpost where we see a truer, confident Romeo shining through as he defends  a woman, who we find is more intimately connected to his nightmare than first believed. It’s also this encounter that leads Shakespeare’s creations toward their next quest to Prospero’s island.

At the core of this new series appears to be Romeo; much less Hamlet as it was in the previous series. More directly, the ever-apparent love triangle between Romeo, Juliet and Hamlet appears central in Tide of Blood, a subplot that may function as the undercurrent during their latest travels. It’s been an underlying eventuality since the three characters came together in the previous series, and now that it’s a central aspect of the plot it’ll be interesting to discover how this affects their mission.

Artist Andy Belanger also returns with his penchant for artistic expressiveness and gore, no more evident than during his succession of pages featuring Romeo’s rescue of the young girl from Titus’ ranks. Belanger begins with Romeo sprinting toward a horse and mounting it mid-stride, dismounting once he reaches the girl before ordering her to ride with it to the river. Staying behind, Romeo defends the position and slays Titus’ pack of attack dogs in a dynamic half-page spread ripe with action depicting a violent visual display of Romeo slaying Titus’ dogs. Later, Belanger again appears in top form as the girl summons the elemental forces from her book to prove her identity to Juliet and the council. The scene depicts the girl immersed in energy as snow, ice, wind and electricity envelopes the room, a greeny-blue colourization emphasizing the elemental mystical powers unleashed from the “Book of Ice.” Shari Chankhamma’s colours emphasize the intricacies of Belanger’s pencils and inks, while the pages that follow show even greater detail in the girl’s ice-water soaked exterior, as well as the group’s marine voyage to Prospero’s island. Belanger again displays his talents in the second last page of the issue as the girl and Romeo chat about his self-worth as he rests himself against the side of the ship while sipping from a flask, his confidence gradually expressed visually as the girl helps him see the man he is. In a moment of realization he silently drops the flask into the ocean, accomplished through the simple sight of the flask hitting the face of the water, having dropped from Romeo’s hand.

The artwork in its entirety has a different feel to it, due to the departure of original colourist Ian Herring. Replacing Herring is Chankhamma who instead offers lighter tones to emphasize the new, lighter world these characters now inhabit. The coluring — although Herring’s was stronger and more vibrant — accentuates Belanger’s great pencil work and visuals all the same, providing an as equally appealing viewing experience as the first volumes. Belanger’s art is an integral part of Del Col and McCreery’s epic, and their choice in Chankhamma was a good one to complement Belanger’s pencils and inks.

Del Col, McCreery and Belanger have returned in fine form with their latest work. The story is as interesting as their previous offering, holding the same potential to captivate readers as the first volumes did. Tide of Blood promises to be a great new chapter in the Kill Shakespeare series, one ripe with love, conflict, twists and turns that fans of the series have come to expect.