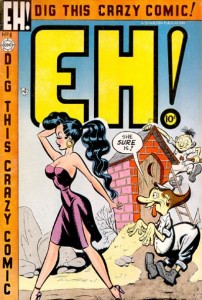 One of the most important factors that make a comic collectible is the cover. Of course the character is the primary factor in determining collectability and it’s followed by a plethora of other factors, grade, scarcity, creative teams, historic significance etc.

Covers have always been right in the mix when determining collectability. Comic demand is often created by the mystique, legend, allure of certain covers, there are some comic covers that we simply must own.

You probably couldn’t count the number of times the Overstreet Comic Book Price Guide points out an issue as having a “classic cover”. Probably too many times is my feeling.

Comics are a very visual media and comics with spectacular, memorable covers can become collectible regardless of the contents of the comic.

Who can resist a Black Cat Mystery #50 or a Superman #14? Not many people can, these are highly sought after books primarily for their covers.

I personally have always loved hidden innuendo on covers. This site has a fun feature called Sleepy Sensors which features risqué, innuendo type covers artists were producing after the implementation of the Comics Code in the mid 1950s.

Well our Undervalued Spotlight this week is a pre-code comics, it was printed in an era when almost anything went on a cover (thus the need for a comic code I guess). Sure they allowed a lot in the early 1950s on comic book covers but one thing they never allowed was swearing.

EH! #4 got away with it by using a sight gag. And the cool thing about this book is that not a lot of people are aware of this. This comic should be more infamous than it currently is.

In the old days when guys saw a “well endowed, well built” woman walking by they’d make the comment “wow! she’s built like a brick shithouse!”

“She sure is”, with a brick shithouse in the background is priceless.

Who would not want this book! I don’t have a copy but I sure wish I did.

This is also a very tough book to find, only 2 have been CGC’d (the other being a 7.5). I do think there are copies out there and I think it’s more about awareness. If you are sitting on one of these please slab it and put it up for auction so I can bid on it.