One of the topics I generally like to talk to my students about sequential art and thus comics are how they are really just another way of telling a story. Not unlike prose, visual art, dance, poetry, etc, sequential art is just a medium. The problem with this medium, is that it was massively stunted in the mid 1950’s when the comics code was created.

Comic books are a bit of a misnomer.

Comics aren’t comical. Well most of them aren’t. There are a few that can be funny, but really, when was the last time you read a Batman comic

that made you (intentionally) laugh? Not recently I’m sure. The comics code came out of a need to censor comics because there was a belief that comics were corrupting the young impressionable minds of the day. This primarily was the work of Frederic Wertham and his book Seduction of the Innocent. (Originals sell for big money on ebay now). Wertham was concerned about the fact that the content of the books was pushing the boundaries to excess. Gore, horror, sex, etc. He even stated that the relationship between Batman and Robin was unwholesome and not natural.

This all stemmed from the increase in crime and horror comics in the late 1940s and early 1950’s. The second world war had ended at that time and people were no longer interested in superhero books that had become so popular about a decade earlier. Men returning from the war may have been subjected to real evils and couldn’t go back to reading comics about “entertaining evils” like the Joker or monsters from the earth’s core. So realistic crime and horror books became the popular mode of entertainment for the masses. 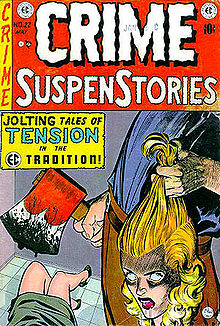 These comics included covers that had beheadings, suicides, stabbings, and people’s faces melting off. It’s funny how a little bit of face melting will cause public outcry. So the individual publishers got together and formed a bit of self censoring. The agreed to participate in a program called the Comics Code Authority where they would have to submit their stories before printing to get a comics code stamp of approval. Changes could be made before printing and thus would get the stamp.

The stamp itself was a way of letting retailers know that the comics they were selling would be suitable for children to read. Retailers didn’t need a backlash against them for selling comics that could be seen as the source of corrupt children. So with this censorship, the medium of sequential art and thus, comic books was stunted. Stories had to be somewhat bland, and certainly not push the boundaries of what could be talked about.

There was a backlash against the code in the later 1960′ when creators like Robert Crumb started publishing what was called ‘Underground’ comics. With little print runs and not much in production value, many underground comics went unnoticed. However their stories had no code to contain their content. Thus sex, drugs, and violence were often the themes of these undergrounds. The comics code started in 1954 and although it still continues to this day, few publisher still use it. Marvel stopped using it in 2001 and DC only uses it for their Johnny DC line.

So finally after years of stunting the growth of the medium, comic books and their boundaries are being pushed. But is that really what we want? Do we need to see Batman peeing himself as he was written by Kevin Smith in Batman: The Widening Gyre #6? I would have to say no.

But then that’s just my opinion and all this stuff needs to be taken out of my brain once in a while.