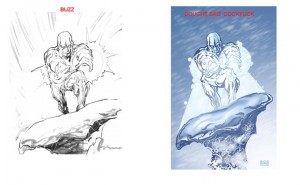 So I received an email this morning from the Pittsburgh Comicon Community that the Rob Granito story continues to get better. The website Comics Cube posted an article this morning about how they received a letter from an “Alison” stating that she was Rob Granito’s wife. The gist of the letter states that Rob is now offering interviews for cash.

Here is what transpired:

March 2011 was a month that the comics industry, and comics fandom, was not expecting! A month where suddenly comics websites became ‘TMZ-like’, and scandal and tabloid excitement erupted. This was due to the controversial Rob Granito.

We ask you to consider looking past personal feelings and judgement to consider the following:

-A Facebook Group about Robert Granito had over 3,000 members in less than a week

-Websites such as comicsalliance, Wired, and many others made Rob Granito a major headline

-An entire convention panel is due to Rob Granito, called ‘How Should An Artist React To Being Granito’d’?

The Blog owner at All Things Geeky even explained how he had thousands of visitors to his site when he had never experienced that before. Rob Granito has gotten more attention and caused more talking amongst his detractors and his fans than any other comics professional!

Now is YOUR chance to take advantage of this red-hot story. As Charlie Sheen has proven in the mainstream media, controversy sells. It has been proven, and suggested by the convention fans blog that Rob Granito is the Charlie Sheen of Comics. And just like Charlie Sheen caused MAJOR headlines with his controversial 20/20 interview, now YOU can get Rob Granito to sit for an interview for your site or blog!

Rob Granito will live up to his image as the bad boy of comics, who admits he has made some mistakes (but who hasn’t?) but also points out that comics fandom at large does not know the WHOLE story. Find out how Rob Granito began as an artist. Discover what his experience was with the legendary Dave Stevens. Find out what REALLY went down with Mark Waid. Learn how Rob feels about the comics professionals who have derided his name in the past few weeks like Ty Templeton Jamar Igle, Al Rio, and more!

We assure you Rob Granito will live up to his interview commitments. We guarantee candid, explanatory revelations. Rob Granito proved he shook up the world in March 2011! Now watch him light up the Spring comics schedule. “I will keep going to conventions”, he says. Also, why did BleedingCool decide to break the Rob Granito story out of nowhere? Why was it pursued with such a fever? “There is more there that you dont know about”, says Rob.

ALL WEBSITES: the following is a list of Rob’ interview fees

Thank you for your time. We look forward to working with you.
Alison c/o
Robert Granito Art Services

This seems to me to be direct attempt at Charlie Sheen-ing bad publicity into dollars. However, Rob, I hate to say it, but you’re not Charlie Sheen. You don’t have a syndicated television hit show. Sorry.