So this past weekend I drove down to the Pittsburgh Comicon, because the two comic conventions in Toronto in the last month weren’t enough for this fanboy. So my co-pilot Ian, and I set out to steel-town USA, to see how the show had progressed (regressed?) from years past. (We had gone to this show many times before, but thought it was kinda going downhill, but thought we would try it again).

Once we got in the car and set out on our journey, our first good sign was at the border during customs. Yes believe it or not, it wasn’t painful at all. The officer was polite and asked the usual questions and was a little surprised we were going to a comic convention. Then the officer asked what our favourite comics were. Truthfully, I said Captain America and he seemed happy about that. However when Ian mentioned Aquaman, he wasn’t too impressed and grilled us as to what use Aquaman said during a robbery. Ian’s answer of “If the robbery was on a boat…” made the officer wince and reply “That’s kind of stretching it”. And then we were given our passports back surprised not to have the “Nerd” stamp on them. 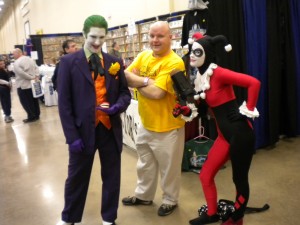 We passed by the usual places along the way down including the always intriguing Fireworks AND Karate Supply store. And the usual comments of: “I’ll have a burning schoolhouse and a bo staff please.” Surprisingly enough we DIDN’T get lost around the Cranberry exit. Good work Google Maps!

As of last year the convention is now being held in the Monroeville Convention Center. As we hadn’t gone in a few years, this was our first forray into the new digs. Well, the new venue is fantastic! It didn’t feel like I was in someone’s basement. It was bright, clean, and spacious! So far so good! Always in a state of over-excitement, we never know what to do first. So we decided to plan out our route as to not miss anything. Within the first few minutes we encountered some very nice artists and then we noticed the Unofficial Lego Museum. They had a Darth Vader and a Spider-Man built out of Lego that we thought was pretty cool. We each picked up a random pack too. I got the snowboarder and Ian got the guy in the gorilla suit.

As we moved around, we noticed that there were a lot of artists to look at their wares. Lots of small press stuff included too. We didn’t see too many people dressed up, but the ones we did see, clearly put lots of effort into their costumes. Unlike years past where you may see someone have lame cardboard masks or something like that, this year everyone we did see was professional looking. The actual costume contest was Sunday and we had already gone by then so I am sure we missed some good ones.

The convention had a fair amount of dealers. There was a good selection of comics to buy. If you were looking for $1.00 books, there were lots to choose from. If you were looking for rare comics, well, Harley Yee was there (among others) to sell you those too. And of course there was everything in between. I wouldn’t say that it was a buyers paradise, as there could have been more dealers there, but there were enough to satisfy every collector. The one section of the show that I thought was lacking were the toy dealers. I don’t buy a lot of toys so it didn’t really bother me. However if you were looking for any older or vintage toys, you were out of luck. There were only about 3 or 4 toy dealers and they kind of had the same stuff: lots of DC and Marvel figures.

I picked up some good books for myself and a couple of nice sketches, but on the whole, I didn’t really buy a lot. But I wasn’t looking to spend a lot either. The Pittsburgh comicon is a classic comic convention done really well. It’s not an over-hyped media event like the San Diego con. NOR is it a place for 4th rate celebrities to hold on to some sort of status they may have once had (I’m looking at you Motor City Con). Mind you if that’s your thing, those conventions exist! Oh! Another good point about the convention was the lack of weapons dealers. No maces or shields being sold here. There was one sword dealer that had replica samurai swords but that was it.

For those wishing to attend this convention, one word of advice. Don’t expect to be super busy for all three days. It’s really just a one day show. If you wanted to stretch it into 2 or 3 and get lots of sketches, or scour the dollar bins, you could do that too. But if you are looking for specific collector items or autographs, you can probably get it done in a day. Kudos must go out to the Pittsburgh Comicon promoters for organizing a great comic show.