Do you still read comic strip comics from the newspaper? Do you read them online?  Or do you even bother anymore?

When I was a kid, I used to read the Saturday newspaper comics religiously.

Okay, I know they are usually called the Sunday comics, but none of the newspapers my parents had a subscription for had any comics on Sunday. I think that is more of a United States thing.

Now, I still get the newspaper everyday and I still read the comics, but I have a feeling I am a minority on this topic.

Who else reads the daily newspapers and follows the exploits of Sherman’s Lagoon? Have you even realized that the artist on Adam has changed? It’s actually funny again. Well…funnier than it was.

I have friends that get their daily, or sometimes not so daily, dose of co

mic strips via internet sites. There are those sites that have all kinds of daily comics together in one site. Of course there are lots of comic strips that don’t run in some of the syndicated papers like Red Meat often featuring Milkman Dan. (Note: Red meat really isn’t for kids and shouldn’t be next to Hagar The Horrible.)

I guess what I am wondering is whether or not daily comic strips still have a place in today’s society. Do people still read them?

It’s amazing how around 100 years ago, people were buying newspapers because of the comic strips. Richard Felton Outcault’s strip of “Hogan’s Alley” or “Down Hogan’s Alley” had the first comic strip “star”, the Yellow Kid, which appeared in Joseph Pulitzer’s New York World newspaper. Note he wasn’t called that at first: experiments with dye at the time was the reason for his colour.

This cartoon was such a hit that William Randolph Hearst stole away Outcault and his creation for New York Journal American. BUT Pulitzer still had the copyright to Hogan’s Alley. So TWO newspapers were now printing the same comic strip. Syndication in many newspapers wasn’t a possibility then.

The popularity of the 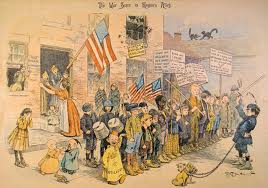 comic strip was staggering. This is what was helping sell newspapers. Well, that and the fact that both papers were accused of falsifying news AND both papers carried the Yellow Kid. So the fight became known as the Yellow Wars and because of the extreme desire to fabricate and sell newspaper, we now have the term “Yellow Kid Journalism” or just “Yellow Journalism”. But I digress…

Comic strips at one point had a large role in newspapers but with the advent of the internet and the declining newspaper sales (according to many internet sites), does the comic strip still have a role in today’s market?

I’m not so sure, but I will continue to read them. But will you?