What I mean by going hardcore was the moment you crossed from casual fan to that guy who came in to the comic shop on a regular basis. Where you stopped buying from the corner store and started buying comics on Wednesdays at a comic shop.

For me it was the summer of 1991 and I saw the very first issue of X-Force at the corner store. 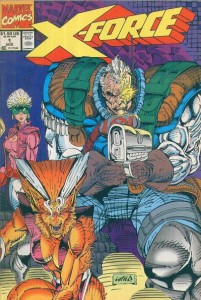 Now I had been buying comics on a semi regular basis for years but up until that point I had never collected an actual series; I had issues of Spider-Man, Iron Man, Captain America, Batman, what ever caught my fancy. I had quite a few but X-Force #1 sealed the deal.

Problem was, I then had to find a comic shop that I liked…and that my folks would drive me to.

I first tried two shops in downtown Barrie. As anyone who ever shopped for comics during that time period would tell you, these shops weren’t exactly great for younger readers. Long standing convention rumors have had it that one of the shop proprietors was the basis for Comic Book Guy on The Simpsons.

It might not be true and but it’s a pretty close resemblance.

A comic shop opened in Bradford not to far from my Mom’s work. Unfortunately it wasn’t much of a shop in terms of product.

Next was a shop in downtown Newmarket. Better than both the Barrie stores by far but unfortunately for a kid who didn’t drive and didn’t take bus, it was pretty awkward to get to.

And then my shining light opened: Triple Play Comics and Cards.  Just on the outskirts of Newmarket, right on the way to the mall or on the way back home so it was pretty easy to convince a parental unit to drive to.  Triple Play is kind of the minimum standard I set for comic shops from there out. Knowledgeable staff, comfy atmosphere, clean and bright lighting.

It wasn’t a dingy hole.

One of the guys who worked there, Ryan, hooked me up with my first pull box and with issue 6, my collection was on its way. I ended up buying X-Force 1- 32 but it was also during that period my tastes discovered other comics. There was this awesome show on TVO called Prisoners of Gravity and this dude named Neil Gaiman kept popping up on episode after episode. The comic he wrote, The Sandman, sounded interesting so on a whim, I bought the first trade from the cute blond that worked there (hi Joanne!) and was instantly hooked.

Soon after X-Force, Sandman trades were added to my list as was Grendel Tales (a Grendel spin-off book). This was followed quickly by Preacher trades.

Can you now see how comics can be like heroin?

Triple Play is now gone sadly. The original owners sold off and went on to other ventures and the new owners couldn’t quite cut it. I still maintain a bit of contact with two of the store’s workers. Joanne and I chat via Facebook and actually meet up in person about every couple of years or so. She went on to self publish her own comic Rummblestrips (and on the off-chance you ever meet the lovely Joanne, bug her about it and then we might get another issue). Ryan still works at conventions so I see him once a year. Which usually has him remind me how old I am by telling me how old his daughter is.

Why I ask and punish myself with this, I’m still not sure.

I floated between shops for a while afterwards finally settling down at The Blue Beetle where my pull box calls home.

Now I look for it in the eyes of customers at the shop; the moment they are going to crossover from regular reader into hardcore mode. It makes my heart smile a little. 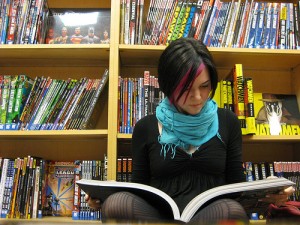 Now for your turn.  Do you remember what comic it was that turned you into more than a casual reader?  Or a particular moment?