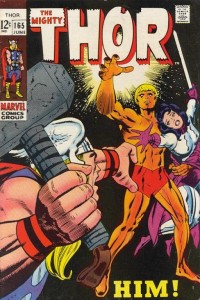 This week’s Undervalued Spotlight is lovingly written by Mike Huddleston. Mike has written a couple for us before and he has a great eye for books that are more deserving. Mike’s personal insights are always refreshing and inspiring. I’m always happy when he sends one of his picks in. This week I’m extra happy as I’ve just returned from the Montreal Comic Con and just can’t seem to muster the energy to deliver a quality post.

Mike knows quality though and he delivers it all the while featuring it. Perhaps I should stop making little sense and pass things over to Mike…

Our Undervalued Spotlight today shines for the first time on our favourite God of Thunder the Mighty Thor – Issue #165, dated June 1969, and is a Stan Lee/Jack Kirby collaboration.

Thor is a long standing character in Marvel’s stable of super-heroes. He first appeared in Journey Into Mystery #83 in August 1962. He eventually took over the book completely with issue #126 becoming The Mighty Thor which ran the first time until issue #377, and there have been subsequent volumes as well. He is also an original and long standing member of the Avengers. He has starred in his own movie and has a second on the way, and is also part of the Avenger movie franchise. Areal popular guy!

I began reading and collecting Thor way back in issue #135 Thor vs. the Man Beast (great white cover), and have been a fan ever since. In the Silver and Bronze age of comics he was a staple for me. Of course I bought and sold my collection a couple of times, and outside of getting a good #126 it wasn’t that hard to do. Except for one other issue; our spotlight issue #165. This book had a glossy black cover that seemed to show every single flaw and defect. It would be very hard to find an 8.0 copy let alone anything higher. There were lots of nice looking books that would grade say 6.5 -7.5, but the defects were very noticeable – and this was the late 70’s early 80’s here. The cover itself was again wonderfully drawn by Jack Kirby, with an angry Thunder-God in the foreground, a beautiful damsel in distress (Sif) and the Man-child kidnapper Him! (OK that’s a little over the top).

Next we have a very solid typical Thor story. On earth Thor, Sif, and Balder the Brave (who must have been standing behind Thor on the cover) are basking in the glow over the defeat of Pluto and his minions. They move on to investigate a mysterious Atomic plant that Pluto himself seemed afraid to enter. Inside we find the cocoon and Him!, last seen in Fantastic 4 #66 & 67. He has arrived back on earth with some assistance from Walt’s buddy The Watcher. Emerging from his cocoon Him! is desperately lonely and wants a mate. He’s see Sif and decides it’s her. “I say thee nay!” cries Thor, and a battle is about to ensue when a sub-plot (The Hagg – aptly named) breaks into the story. Thor saves Balder the Brave in the sub-plot, and Him! and Sif disappear. This sets up a big battle issue for Thor#166 (also recommended).

Him!’s appearance here is significant today. Him! soon evolves into Adam Warlock (and later The Magus) , and this book is described by the Overstreet Guide as Warlock’s first full appearance. Some might argue that appearance takes place in Marvel Premiere #1. Nonetheless as a sometimes member of the Guardians of the Galaxy and a Thanos antagonist there is rampant speculation that this character will be involved in the upcoming GOTG movie and the new Avengers movie as well. I honestly can’t see how he could not be in the movies given Warlock’s history with Thanos, Ultron, and the Infinity Gauntlet.

We can’t leave the book and Thor in general without a big tip of the hat to Jack Kirby. I know most people associate Kirby with Captain America and the Fantastic 4, however is long run of excellence on Thor ranks up there with those books. I actually think Kirby probably enjoyed drawing Thor and all of his wondrous far away worlds and galaxies the most. It had to be a great release for his imagination. I feel lucky to have read his work while it was coming out and everyone just thought it was a “normal, regular,” comic. How little we knew!!

The back-issue market for Thor comics from #127 up is still pretty undervalued in my opinion. I don’t think this will last forever. I am also certain there will be a few more spotlights from this era in the future.