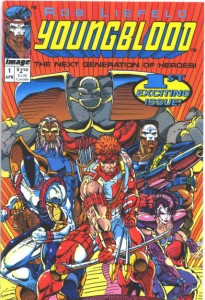 This week’s pick came to me as I was examining recent Direct Market numbers. Slowly but surely Image Comics is cementing a dominant and distinctive 3rd place in our industry. At their current rate, Image’s share of the market may top 10% real soon and this is significant news.

Allow me to generalize for a bit. Marvel, for the most part, is just repackaging existing properties and to a lesser degree so is DC. The #4 publisher in market share is IDW and they seem content providing licensed material content.

With market dynamics like these it seems obvious that the one publisher consistently creating innovative, original material should be the rising star.

Most telling is DC’s recent change to the way they pay their talent. DC has obviously seen the Image model as the model of the future; at least they see it as the model of success in today’s market. Read more.

I have no allusions of this week’s pick increasing 10 fold in value anytime soon. I am championing the book as an important one to have in your well balanced and diverse collection.

This week’s pick honors the book that launched Image Comics. I’m sure you know the story. In 1992 a bunch of disgruntled Marvel talent (including Liefeld, Todd McFarlane, Jim Lee and Marc Silvestri) launch their own creator-owned publishing company, they name it Image and their debut comic was Rob Liefeld’s Youngblood #1. It’s not like these guys just took off, they met with Marvel execs and demanded more creative say, more royalty pay etc. Marvel of course turned them down.

Youngblood #1’s importance comes from what it ushers in. This is the first Image comic published; it helped trigger the speculator boom that took the industry to new heights before almost ruining everything for everybody thanks to the speculator crash of the mid 1990s. But these are just the historical markers Youngblood #1 has left. I would not have picked this book had the company failed. Image did not fail if anything Image today seems to be the industry’s hope for the future.

Pick up a copy of Youngblood #1, it won’t cost you much and in return you’ll pick up what is a very important comic book.

Its funny but this book can sometimes be hard to find. Sure it’s all over the internet but at cons and in comic shops it could be a tough book to track down. The thing with this book is most of its print run is stockpiled in mass multiples, owned mostly by 90s speculators. I’d say 80% of these speculators are no longer active, who knows what some of these guys have done with their stacks?

The 43rd edition of the Overstreet Comic Book Price Guide shows $5 as the 9.2 price.