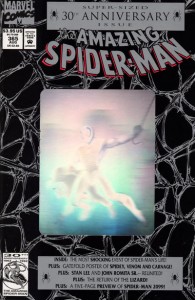 This week I’m featuring a comic that many collectors of my generation tend to overlook. It’s also a book not high up the want lists of younger collectors. I think we’ve got Amazing Spider-Man #365 all wrong.

Amazing Spider-Man #365 celebrates the 30th anniversary of the publication of Amazing Fantasy #15, the August 1962 comic that introduced the world to Spider-Man. Marvel did Spider-Man’s 30th right, they gave us a big 84 pager crammed with great features, pleasant surprises and interesting introductions.

The first thing Marvel did right was to give then cover artist Mark Bagley an issue off and call on Spidey legend John Romita for cover duties. I actually think the hologram cover has worked against this book for decades. I think we all associate these hologram covers with the crass gimmicks of the over speculated 90s. We see a hologram cover and we think industry collapse!

The main story is a 31 pager featuring the Lizard. The story also features the strange reappearance of Peter Parker’s parents. Parker’s parents, introduced way back in Amazing Spider-Man Annual #5 were always shown in flashback; in this issue they  appear in continuity for what I believe is the 1st time. They pop in on Aunt May unannounced creating quite the scene. Are they really Peter’s parents? Peter’s parents later share the cover of Amazing Spider-Man #388, sadly in #388 we find out that Richard and Mary Parker were robots sent by the Chameleon to find out Peter’s secret identity.

One of my favorite features of Amazing Spider-Man #365 is the great looking 3 page fold out poster by Mark Bagley that features Spidey, Venom and Carnage; remember this issue is coming fresh off the now classic #361-363 Carnage issues.

This week’s pick also offers up a nice 12 page exploration of the origins of Venom. “The Lost Days” written by David Michelinie deals with events that happens before, during and after Web of Spider-Man #18.

Let’s see what else I can use to sell you on this book.

The 2099 premise is actually the most important contribution from this book and I’m arguing it deserves much more respect than it’s getting.

The whole 2099 concept was a very ambitious undertaking, 10 titles including X-Men 2099, Punisher 2099 and Hulk 2099 were launched and received a positive welcome from fans. Timing is everything and the whole 2099 rollout on the eve of the great market collapse tarnishes the project by association, much like our hologram cover, we look at the 2099 books and think 90s crash.

Peter David’s Spider-Man 2099 has many loyal fans; the premise of a dystopian future ruled by evil corporations has never been more sellable.

A current Spider-Man 2099 series was launched by Marvel this past summer with original writer Peter David returning to helm the series.

I have to point out that the original 1992 series featured Miguel O’Hara, a Latino, as Spider-Man. Much was made of Miles Morales becoming Spider-Man in the Ultimate Universe a few years back but that was old news even then. Unfortunately we don’t get a look at Miguel out of costume in the 5 page preview which is all the more reason to add Spider-Man 2099 #1 as a companion book when picking up a strong copy of Amazing Spider-Man #365.

Comics are nothing if they aren’t traditional and much is made of females, visible minorities, and people with disabilities taking over roles traditionally played by white males. Spider-Man 2099 was 20 years ahead of the hoopla.

You should have no trouble finding nice tight crisp copies of this book in the $10 range; dig hard enough and you’ll score them cheaper.