I came across an exceptional and rare book on eBay last week! I have been a big fan of Jack Kirby since I saw the Fantastic Four cartoon show in the 60s and then shortly after that bought FF#76 off the stands. After that, I was hooked! I have been fortunate enough to have owned a few pages of original artwork by the King, and most notably a couple of 1950’s Romance pages.

One storyline that I have always wanted to get a page from was from the short-lived series “Sky Masters of the Space Force”! Now I had seen a few pages periodically come up for sale and either by poor timing or just plain being poor, was unable to win any of them at auction.

This strip was introduced in late 1958 after the crash of the comic book market in 1954 had left Jack Kirby and Joe Simon’s short-lived Mainline Publishing out of business. It seemed to Jack that the most secure way for him to make money during the moribund market place of traditional comics was to create a syndicated strip which would allow for a larger audience and therefore a larger share of the royalties.

Now Kirby’s dynamic storytelling was perfect for a strip that was created as a direct result of the Soviets having blasted a satellite into orbit called “Sputnik”, effectively beating the U.S. into space. Dick and Dave Wood, two of National’s most versatile writers, created the plot.

Jack Kirby was undoubtedly a master storyteller, but his work had often suffered as a result of less than complimentary inkers. No one really knows the story about how Wally Wood came to be asked to ink the series, but Wally Wood was another master storyteller who had cut his teeth on the legendary EC Comics line. After the crash in ’54 he had left doing comics and went into the much more lucrative Mad Magazine.

On the surface, the two artists had totally different styles. Styles that you would not necessarily think would mesh together into a working collaboration. Wood however was a huge Kirby fan and jumped at the chance to ink and letter the strip.The result can only be described as a fantastic collaboration, rivaling that of the work that Joe Sinnott would later supply to Kirby’s Fantastic Four, years later. There are also a feeling of déjà vu when seeing the rocket ship sequences! 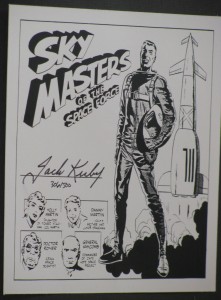 The book I found on eBay is a signed, limited edition copy limited to only 500 printed! It features the whole run in high quality reproductions of the daily strip , with the Sunday strips reproduced in colour.

The thing that is so mind-boggling about it is how technically accurate it was, at a time when there was no manned space flight whatsoever, and yet the technical aspects such as a 3 stage rocket , the separation of the stages, as well as huge detail regarding speeds and distances etc. that makes this series a real stand out!

If you are a Kirby fan and want to see what I believe to be a fine piece of work, search for this book. It won’t show up often, but when it does, scoop it up!

You will not be disappointed.