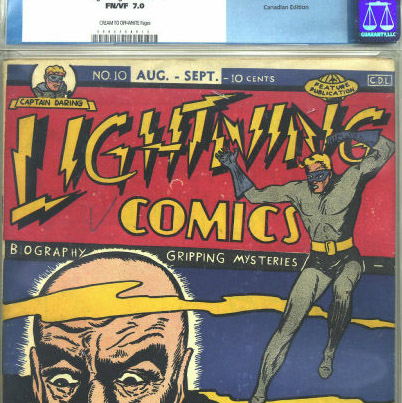 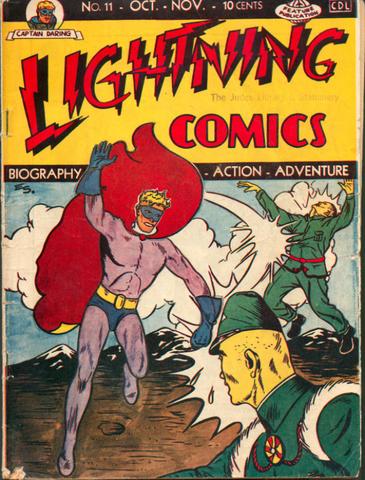 When we think of Canadian war-time comic publishing companies, we usually think of the “Big Four”: Maple Leaf Publications, Anglo-American Publications, Bell Features, and Educational Projects with Adrian Dingle’s Hillborough Studio run of Triumph-Adventure Comics appended to Cy Bell’s books. These were the solid, longer-running companies, and you can see an earlier post of mine on them, but there were a number of sporadic, minor bursts of publication efforts with most as the war was ending or just after. I’ve also dealt briefly with Century Publications and Rucker Publications in previous posts. In our growing online database of WECA comics we use the category “Misc.” for these other publishers and I’d like to deal with a couple of them here. 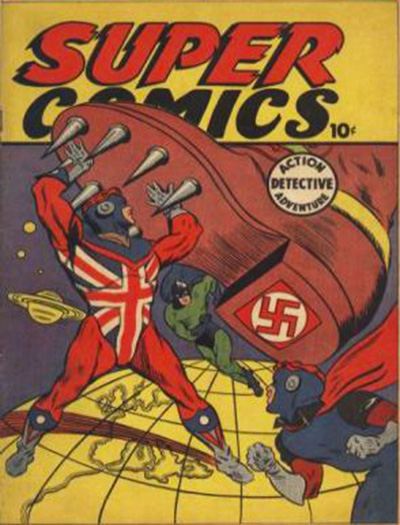 Perhaps the first was Citren with its reprint of Pep Comics No. 22 in 1942 which it named Super Comics. In 1943 F. E. Howard Publications followed up with a six issue run of Super Comics Vol. 2 which contained more MLJ. These books are all tremendously collectible because American MLJ/Archie collectors have developed an interest in them and they command surprisingly high prices for being little more than reprints of American books. 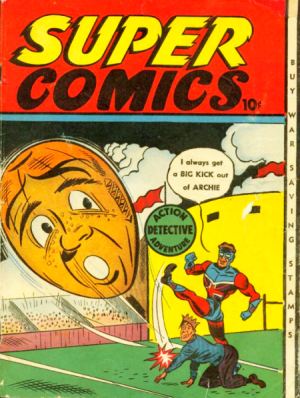 The next company I’d like to consider is Feature Publications which seems to have been put together by former Bell Features (“Marvo Espionage Agent” in Joke Comics No. 8 and 10) artist Israel (Ed) Schecter who also did some work for Rucker in Weekender Vol. 1 No. 2. 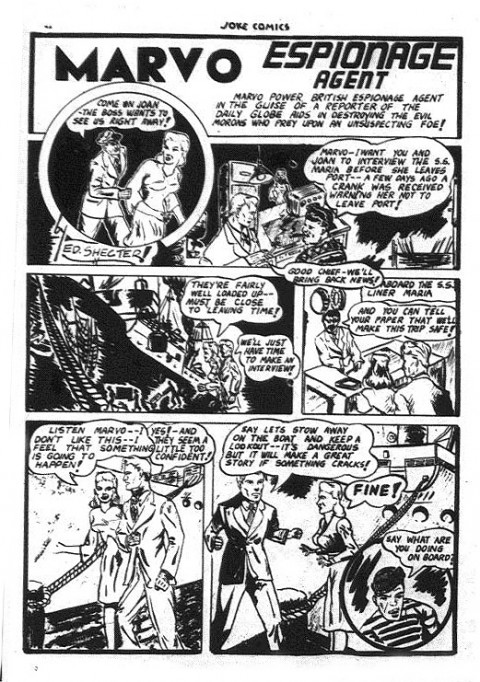 Feature Publications only title was Lightning Comics and it had a three book run starting with No. 10 (Aug./Sept. 1944). Schecter’s illustrations were some of the most primitive and crudest of the WECA period, but he tried and he has made a contribution to the Canadian war-time comic period. 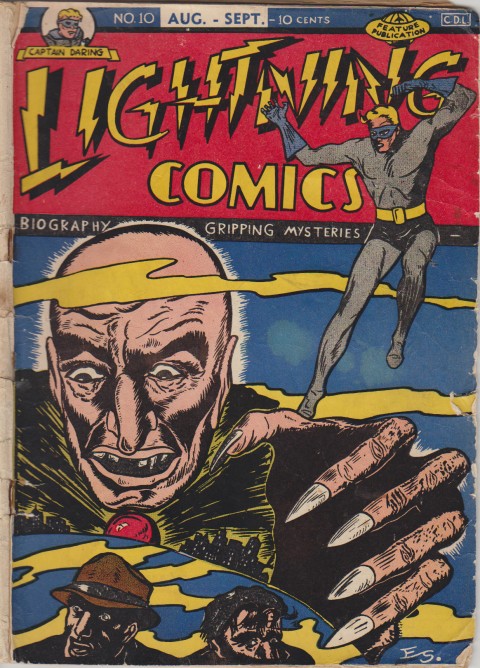 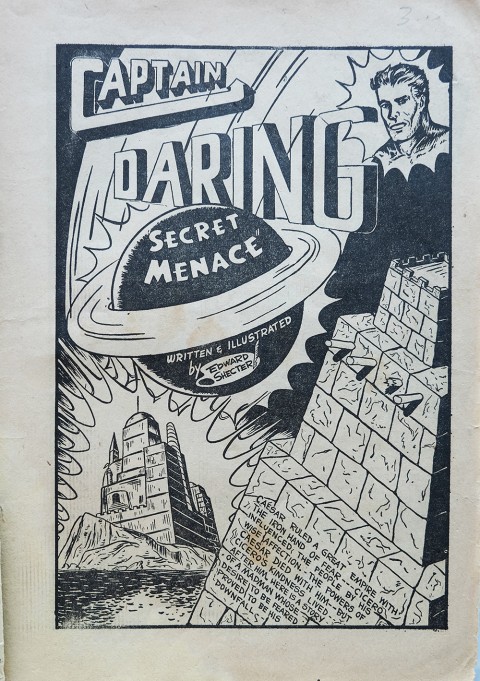 The first Captain Daring splash from Lightning Comics No. 10

The three issue Lightning Comics run always had Schecter creation Captain Daring on the cover and as the lead off story. The Captain was a costumed crime fighter with a souped up plane called the auto-gyro but no other apparent powers. 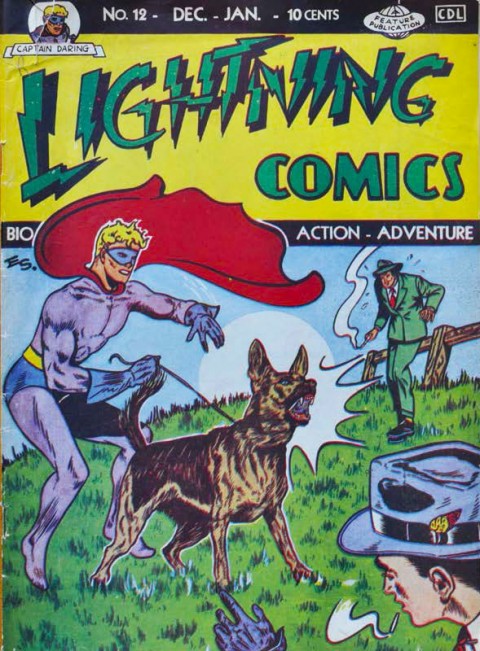 Schecter also contributed the war-pilot adventure strip called “Flash Fulton” and an army story called “Daredevil Commandos” to the first issue of the title. Though the other stories in the issue are not signed by Schecter  (“The Thatcher Brothers”—a story of 3 brothers fighting in the French Underground, is signed by Ben Bowman, “Laddie” –a male german shepherd counterpart of Lassie, is signed by Dickens, and another air pilot story “Don Swift”, is signed by Rand Spott) but everything looks like it was done by Schecter as a tour de force operation and these seem to be psuedonymns. 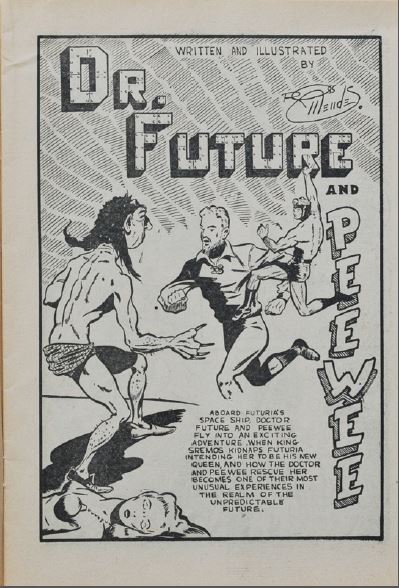 Though I have not been able to find the middle issue, I can say that, by the last issue (No. 12, Dec. 1944-Jan. 1945), Schecter had enlisted the aid of some other artists. Ross Mendes is here, over a year before he was hired by Adrian Dingle and Bell Features and came up with “The Polka Dot Pirate” in Dime Comics No. 25. Mendes’ creation for Lightning Comics was “Dr. Future and Pee Wee” which entailed a battle between good and evil in a far distant future context. In my opinion, Mendes also took over Schecter’s “Don Swift” feature in this issue signing it with his middle name “Allan.” The similarity of style seems unmistakable. 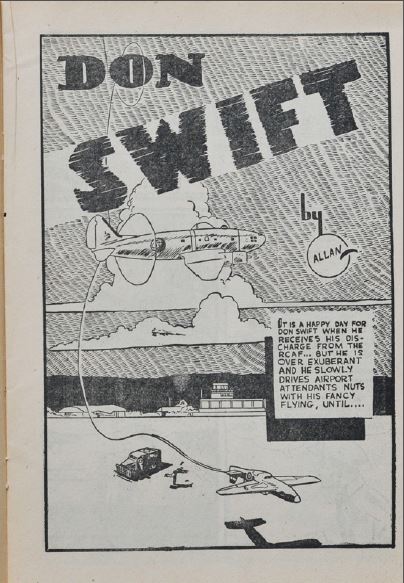 Along with Ross Mendes, Aram Alexanian, who had already been working for Bell Features for about a year since his creation of “Super Commando” in Joke Comics No. 12 (Jan./Feb. 1944), contributed a feature called “Nemesis and Rover the Wonder Dog” to this last issue of Lightning Comics. 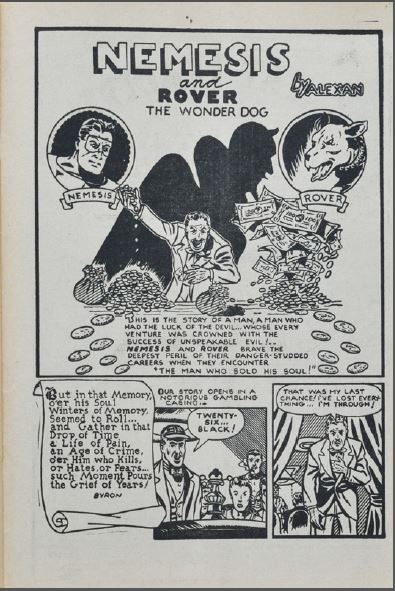 There are two other non-Schecter strips, a funny animal strip called “Sharky,” signed by “Clive,” and a super hero strip called “Dartman” which appears to have a small signature that could be “D. Hampton,” or something close to that. “Dartman” gets his name because he has a special gun that fires super powerful dart. The last main feature in the book is Ed Schecter’s air ace strip called “Flash Fulton.”

Feature publications began and ended with Lightning Comics and these are pretty rare issues to find now. Ed Schecter went on to live in London, Ontario after the war and in the sixties and seventies was a sign painter in Toronto.

Next up are two comics many people don’t think about. The original run of 20 Manny Easson’s The Funny Comics that featured Dizzy Don ended there with issue 20 around April/May 1945. Whether Cy Bell dropped the guillotine on the series or Manny Easson simply left, or a combination of both, there are only 20 Bell Features issues of The Funny Comics. Dizzy Don, however, shows up again in the Spring of 1946, this time in an eponymous comic with the numbering from the Bell issues continued but as Vol. 2 and published by Dizzy Don Enterprises at 21 King St. East, Toronto. Both are in full colour and seem to have the main Dizzy Don stories drawn by Manny Easson but an additional story that is probably not drawn by Manny Easson. In this way, we get Dizzy Don Comics 21 (Spring 1946) and 22 (October 1946). 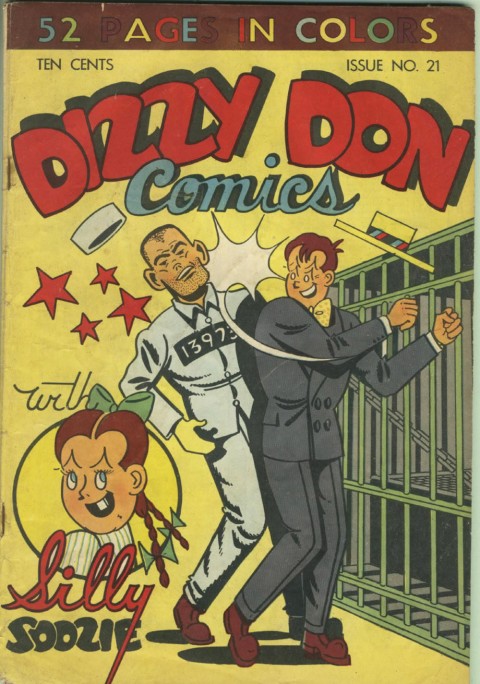 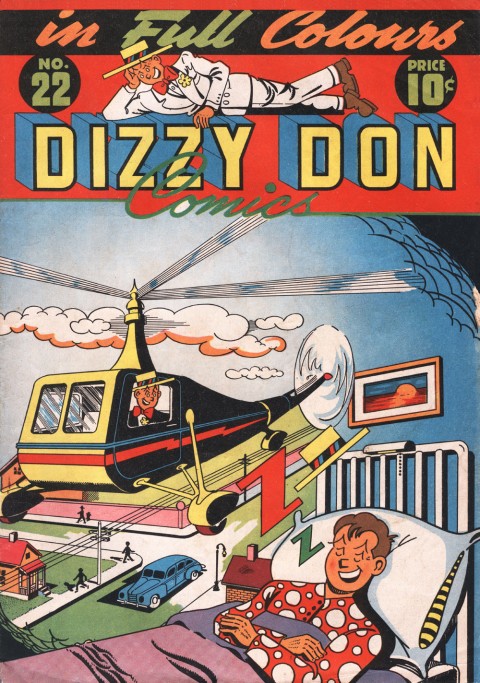 No. 22 was reissued as Dizzy Don Comics No. 3 in the states with the same cover by F. E. Howard Publishers, who had purchased the rights to many Bell Features characters (see Super Duper Comics No. 3, for example). F. E. Howard put out one more issue, Dizzy Don No. 4 in October 1947, in the U. S. with new stories.

Finally, I want to mention the Canadian versions of Classics Comics that came out in the final year of the WECA period. It’s important to remember that the War Exchange Conservation Act of Dec. 6, 1940 didn’t block out every American comic from entering Canada. Certain American comics with redeeming educational value such as True Comics, which began in 1941, had no trouble getting in. When you look at these early issues of True Comics you can easily see how much Educational Projects’ Canadian Heroes Comics modelled themselves after them.

Classics Comics too, were among these educationally redeeming comics allowed into the country during the general ban. Classics Comics No. 12 (HRN 0) was the earliest to have the “15 cents in Canada” notation added to the cover and this was dated June, 1943 so kids could purchase these off the stands alongside issues of Triumph, Grand Slam, and Better Comics. Canadian Heroes Comics seemed to champion these American Classics Comics at the time as we can see in the upper right-hand corner of the inside back cover of Canadian Heroes Vol. 2 No. 3 from July 1943. 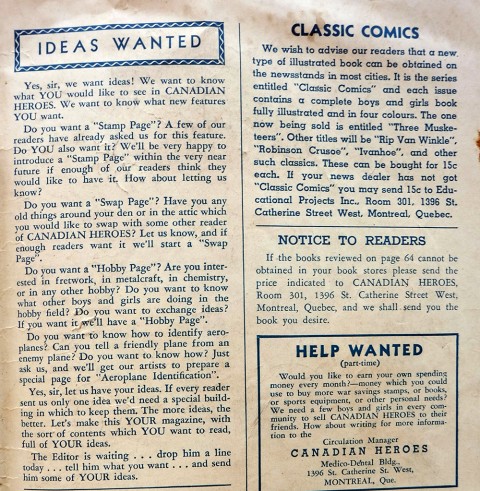 Inside back cover from Canadian Heroes Vol. 1 No. 3 with the mention of Classics Comics.

A year later, Canadian Heroes Comics were offering copies of Classics Comics as incentives in their subscription drives as we see from the back cover of Canadian Heroes Vol. 4 No. 3: 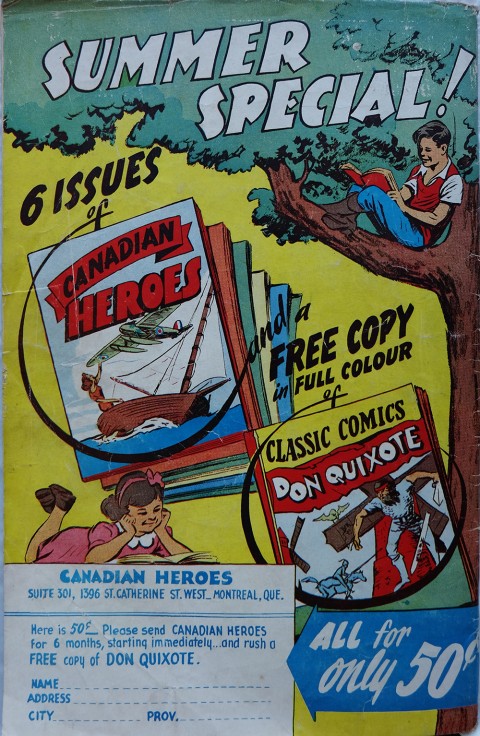 Back cover of Canadian Heroes Vol. 4 No. 3 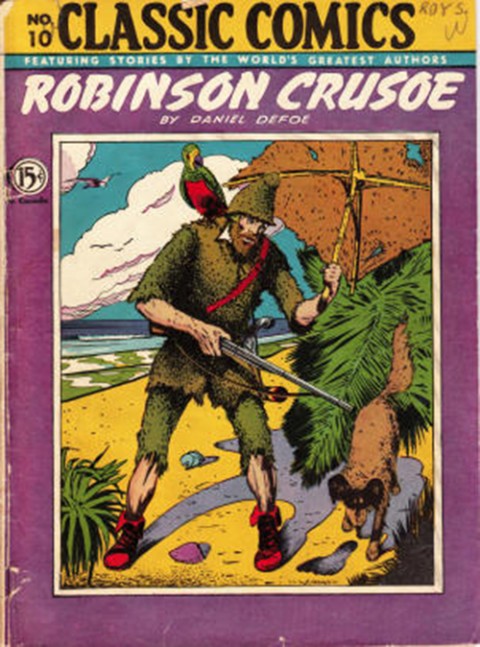 In April of 1946 Gillberton Co. U.S. based in New York officially became Gilberton World-Wide Publications and began publishing its first foreign editions in Canada with its offices there at 371 Bay St. in Toronto. There were only a half-dozen WECA era Classics Comics (these are good examples of issues that fall with the WECA boundaries but can’t justifiably be called Canadian “Whites”) and, for some reason, Gilberton Canada began the series with No. 10 and skipped No. 11 and the first two issues had  new 2 pg. Canadian fillers included. Published from April to October 1946 were:

I don’t have any information on the relative rarity of these issues but they seem to be highly collectible to Classics Collectors.

There you have three of the smaller, misc. publishers of the WECA period. 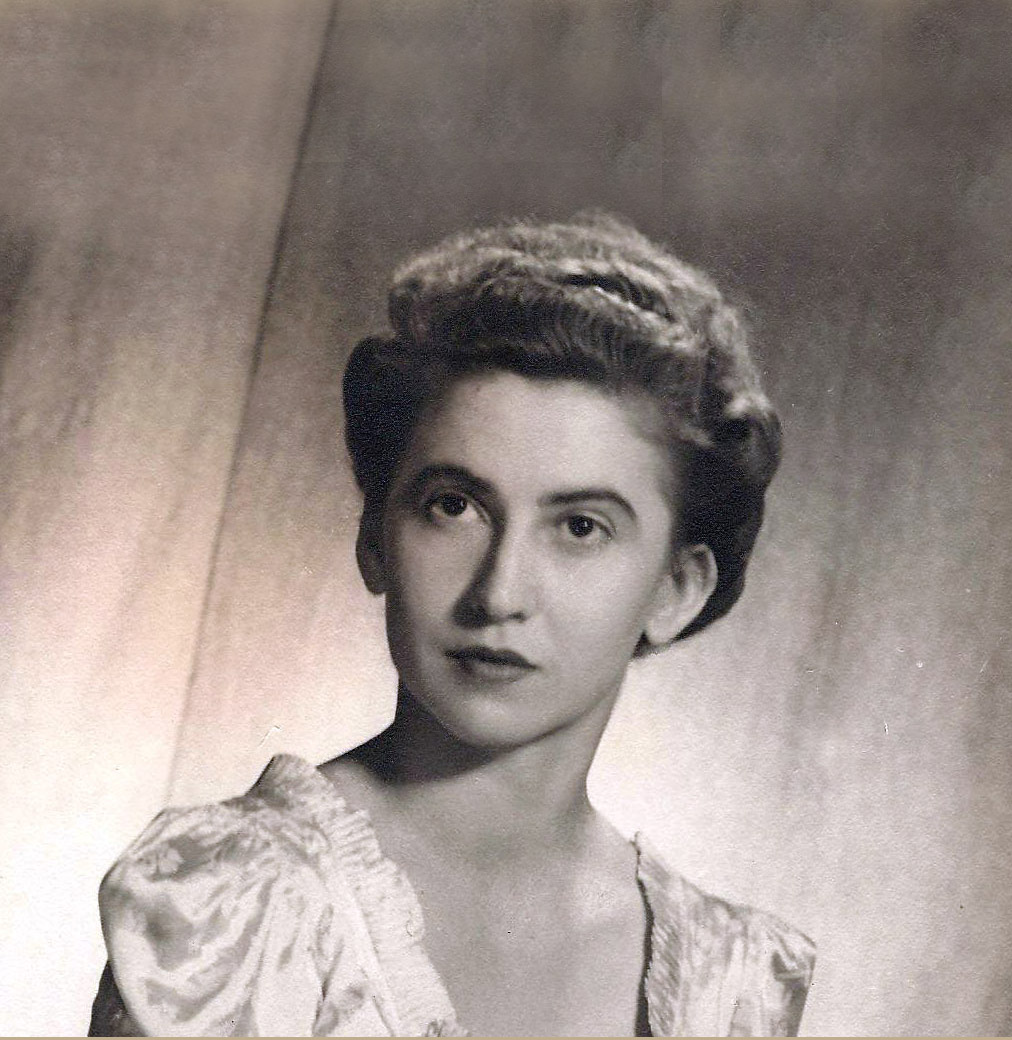 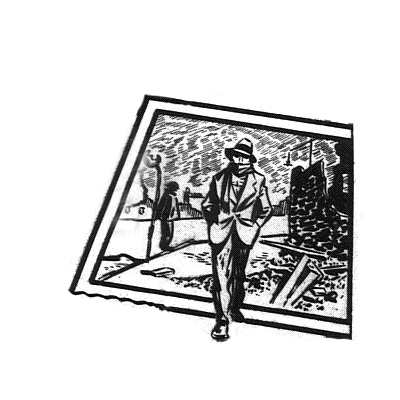 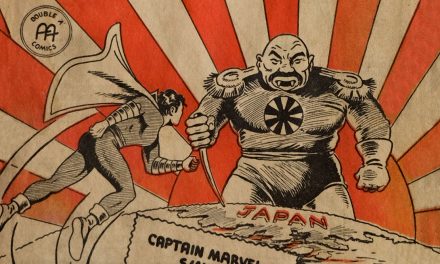