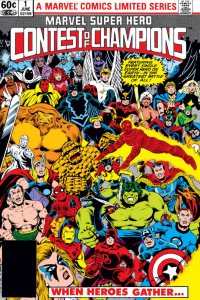 We owe this week’s Undervalued Spotlight to my Comic Culture podcast co-host Chris Owen. On a recent show Chris stumped me on the origins of Marvel’s Contest of Champions, the 3 issue mini-series that ran from June 1982 to August 1982. Hating being one upped by the likes of Owen I dove in and read up on the series. I like what I found.

Chris so eloquently filled us in on how the Contest of Champions concept was originally supposed to be a Marvel Treasury Edition that was to coincide with the 1980 Moscow Olympics. Folks my age will remember a whole bunch of nations boycotting the Olympics over the Soviet Union’s invasion of Afghanistan the year prior.

Marvel ended up shelving the project but the finished pages eventually made their way into then editor Mark Gruenwald’s hands a couple of years later where it was decided that the story would be salvaged. There were some tweaks to the story to remove the Olympic connection and it was decided that the presentation would change from Treasury Edition to a 3 part comic book limited-series.

This project turned into the very first Marvel limited-series paving the way for game changing events like May 1984’s Marvel Superhero Secret Wars.

One positive residual from the Olympic story has to be the International heroes introduced in the story. Collective Man (China), Shamrock (Ireland) and Blitzkrieg (Germany) were a few of the highlights.

The series also features the first installment of an alphabetical listing of all Marvel heroes active in 1982, this concept would soon be further developed by Gruenwald into the Official Handbook of the Marvel Universe.

Comics.org has the best story summary: in a nutshell the Cosmic Elder The Grandmaster places all of the heroes of earth onto an orbiting arena to play a cosmic game he has set up with the mysterious Unknown later relieved as Death. The Grandmaster and Death each pick twelve heroes to compete in gathering four quarters of the Golden Globe of Life. If the Grandmaster’s team wins, his brother, the Collector, will be returned to life but if he loses, his life will be forfeit. Every human on earth has been put in suspended animation to give the heroes a good incentive to play.

The Grandmaster’s team consisted of Captain America, Daredevil, Wolverine, She-Hulk, The Thing wile Death’s team had Iron man, Storm, Invisible Girl, and Black Panther. It would not be hard to see this as an influence on the Civil War storyline that came a couple of decades later.

Hey and you gotta love JR JR piling it on with that crowded cover!

This is a special 3 issue comic series whose influence is greatly unappreciated, for the moment.

I’d recommend grabbing all 3 issues, you won’t be happy with owning just #1. Go CGC 9.4 or 9.6 for graded copies and if you are buying raw make sure they are tight, square crisp copies.

The first installment of an alphabetical listing of all Marvel heroes active in 1982.