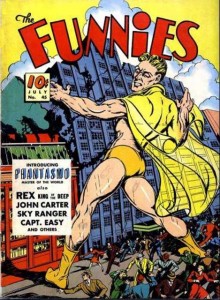 It’s been 13 Spotlights since I last featured a Golden Age book and if I do anything here on the Spotlight it’s spread it around.

This week I’d like to feature The Funnies #45 as my Undervalued Spotlight.

The Funnies #45 is actually a historically significant book, it features the 1st appearance of Phantasmo who is Dell Publishing’s 1st ever superhero.

Of course you’ll mention that Superman, Torch/Subby and Captain Marvel are still all viable concerns today and you’d be right.

I can even see the injustice by looking at Captain Midnight’s 1st appearance later in the same title, The Funnies #57. I like the Captain Midnight intro and don’t disagree with the Guide’s $6,200 but compare that to the measly $1,475 they give to #45 and you want to cry foul.

This just happens to be one of those books the Guide has wrong, lesser books around it Guide at more and historically comparable books have exponentially higher Guide values.

Dell Publishing was a major comic book publisher, they probably sold more comics between 1940 and 1960 than any other publisher. Their 1st foray into the superhero genre should Guide at more than what a common run book in the teens from the Silver Age guides at!

This book is simple way to cheap in the Guide!