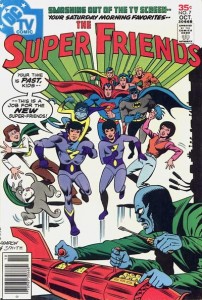 Thank goodness for Guest Spotlight writers! Imagine having only my delusional rantings to read week in and week out! Luckily we have a strong group of Spotlight fans brave enough to stick their necks out and call it like they see it. It’s not as easy as it looks but someone armed with a lot of knowledge and even more passion can sure make it look easy. This week’s guest Spotlight writer Darren Graham makes it look easy because he brings that knowledge and that passion and whips it all together to come up with an excellent pick. Take it away Darren…

For a lot of Gen-Xers like me, 70s-80s Saturday morning cartoons gave us our first exposure to costumed super heroes. Both Super Friends and Spider-man and His Amazing Friends were my gateway drugs to a lifelong addiction of comic book collecting.

Hanna-Barbera created heroes on Super Friends that weren’t in the comics, like Apache Chief, Samurai, El Dorado and Black Vulcan. Easily the most notable of these TV-only creations was the Wonder Twins.  The Wonder Twins looked like a cross between Mr. Spock and Donnie and Marie Osmond. Wearing ridiculous purple tights and delivering some really corny puns, they’ve “activated” themselves into pop culture, for better or worse. They served one purpose: comic relief. For example, Jayna turns into a majestic eagle, Zan transforms into a bucket of water, blue monkey Gleek holds the bucket and they fly off. For younger kids, it was funny because you noticed Zan has the crappier power of the two twins.

The Wonder Twins and Gleek made their first comic appearance in issue 7 of DC’s Super Friends tie-in comic book series in October 1977, a few months after being on the show. The comics provided much more background on the characters than the cartoon – Issue 7 showed them arriving on earth and meeting the JLA for the first time. Issue 14 flashbacks to their origin as orphans and as a duo act in a “space circus”. The origin issue is a great pick, but I have to go with the first appearance as my pick as it’s in higher demand.

Their nostalgic popularity lives on and there have been efforts to bring them back to comics and TV. The Wonder Twins made it into the main DC Comics Universe as they were revamped in 1996’s Extreme Justice and appeared in 2002’s Young Justice and 2003’s JLA/Avengers. On TV, they appeared in an episode of Smallville, in Teen Titans Go, and in Justice League Unlimited as inspiration for characters “Downpour” and “Shifter”. In 2007, the Adult Swim website ran The New Adventures of the Wonder Twins webisodes, a dark humor parody using the original animation style from Super Friends.

In November 2013 a movie poster for a Wonder Twins movie starring Mila Kunis and Ashton Kutcher popped up in a few comic shops, only to be revealed as a “fan-made” hoax a few months later. Because it seemed “so preposterous that it could be true” it sent the interwebs buzzing.

I don’t know if false movie speculation had an effect on demand for Super Friends issue 7, but it’s now enjoying a nice price hike (about 300% of OPG values), especially on eBay, where it’s even going for more than a Super Friends 1. I think what you have is some non-traditional comic collectors snagging copies based on nostalgia alone, not really knowing (or caring) about the grade, and it’s driving up value all around. I’ve noticed some other retailers haven’t caught on to the hotness of the book, and are maintaining prices at or below guide. Might be some good bargain bin opportunities.

Like them or not, I don’t think we’ll be getting rid of the Wonder Twins any time soon, and there’s potential for more appearances in comics and other media in the coming years.