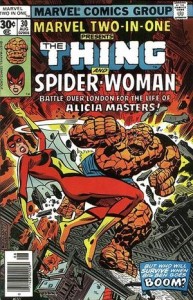 Can there be a more maligned title than Marvel Two in One? I mean you know you suck as a collectible title when the most sought after book in your run is an Annual (Two in One Annual #2 of course). Is there any hope for this title?

Over the last few years the market has been flushing out all kinds of books we once thought were worthless and turning them into hot properties. The whole thing has turned into a bargain bin reclamation project or perhaps a worse way to put it would be to say there is a sort of gentrification of the bargain bins going on.

This week I’ll do my bit to keep flushing and shine the Undervalued Spotlight on Marvel Two in One #30.

Marvel Two in One #30 features the second full appearance of Spider Woman. The book has not moved in the Guide since last year, holding at $16 in the 9.2 grade. It’s tough to get $16 for nice raw copies of this book, tops you are paying right now is $5 and it’s easy to find them for less.

Compare Spider Woman’s second appearance with her first and we see a big discrepancy. Marvel Spotlight #32 (Spider Woman’s first appearance) jumped 150% in the Guide from $50 to $125 and it has been a darling of the market for some time now.

Speaking of collecting strains, this is a 30 cent Marvel and these 30 centers are themselves becoming a cool collecting strain. Correct me if I’m wrong but I believe the 30 cent covers had the shortest existence duration of any of the Marvel cover prices, 14 months?

Our comic features Spider-Woman teaming up with the Thing with appearances by Nick Fury and Mike Huddleston’s favorite, the High Evolutionary.