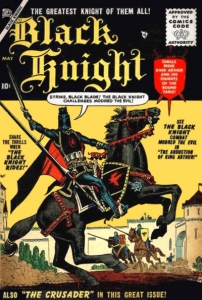 Sometimes writing up a Spotlight opens up all kinds of doors leading to other worthy Spotlights. Case in point: last week’s pick. One detail I didn’t mention in that pick was the appearance of Morgan le Fey, partly because the book brought enough value with the cover and with the rare Werewolf appearance and partly because le Fey led me to another book I wanted to save for this week.

In Arthurian lore Morgan le Fey was the half-sister of Kind Arthur, lover of the evil Mordred and the sorceress apprentice of Mervin.

Perhaps Stan Lee was a regular movie goer back in the early 1950s, Parsifal (1953), Prince Valiant (1954) and The Black Knight starring Alan Ladd (1954) all delivered great Camelot themed entertainment. I’m sure Stan was trying to tap into the popular awareness of these English legends when he published this week’s Undervalued Spotlight pick, The Black Knight #1 in May of 1955.

I write all this up to show that this Black Knight has quite the storied history in the Marvel U. Did you know that the Black Knight was an Avenger appearing in almost 100 issues between Avengers # 252 and #375?

Though Marvel tapped into the Atlas Black Knight early in the Silver Age they waited until late into the Bronze Age before re-discovering Morgan le Fey. It was actually Spider-Woman #2 (May/1978) that reintroduced Morgan le Fey, bringing her firmly into the Marvel U by making her an early nemesis of Spider-Woman’s. The character even appeared in the 1978 Doctor Strange TV movie, she was played by Jessica Walter. More recently, in New Avengers #53 (July/2009) the Eye of Agamotto appeared to Morgan considering her for a replacement for Doctor Strange as the new Sorcerer Supreme.

It’s actually the Morgan le Fey connection to The Black Knight #1 that has me excited the most. The character seems locked into the Doctor Strange world and she should be considered as a character for the new Doctor Strange movie starring Benedict Cumberbatch and Rachel McAdams.

The book does not trade often but when it has over the past few years it has been affordable.