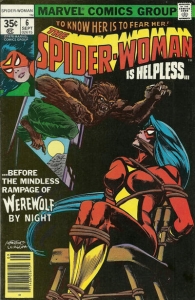 Sometimes Spotlights come to me in the strangest of ways.

I was set up at a comic con last weekend and my cheapie bins were flying: I had a good mix of stuff in those bins from the 60’s to more recent stuff.

People love deals and were bringing them up to me in piles. I was adding up one pile in particular when I came to Spider-Woman #6. I honestly stopped, stood there and admired the book for a bit. I was gonna tell the guy it wasn’t supposed to be in those bins but thought that a bit petty, then I thought I’d let him buy it and offer $4 to buy it back! Thankfully I didn’t go there.

What I did do was run over to another dealer that had a good selection of back issues and rummaged through his S’s. Luck was on my side, he had a copy, but his was $5 and it was in worse shape than mine! I told him the story and was able to talk him down to $3. As I walked away I looked over my shoulder and I swear I saw him shaking his head. You meet all kinds at comic cons.

This week’s Undervalued Spotlight could only be Spider-Woman #6.

Walt, how’s this dumb-ass story supposed to convince me to buy Spider-Woman #6?

Well it’s not, it’s just there to eat up some space.

Spider-Woman #6 boasts a striking Carmine Infantino bondage cover. The cover has a fantastic layout with a great image of Werewolf by Night adding to the scene. The dark cover makes high-grade copies (like the one I sold for $3 bucks) especially fantastic to behold.

Spider-Woman #6 delivers more than a great cover, it’s an early issue in a Spider-Woman run that is becoming more and more collectible and the issue marks the return of Werewolf by Night.

Werewolf by Night first appeared in Marvel Spotlight #2 back in February 1972. A product of the relaxing of the Comics Code Authority brought about in part by Amazing Spider-Man #96, Werewolf was my favorite of Marvel’s three early 70’s Monster titles (Tomb of Dracula and Monster Frankenstein were the other two).

Werewolf by Night got his own title in September 1972 (hosting Moon Knight’s first appearance in issue #32) and the title ran 43 issues ending in March of 1977.

Werewolf by Night was a great character, a public domain property that benefitted from being done the “Marvel Way”. It’s odd that he was forgotten so thoroughly after his title stopped, I mean 18 months is a long time between appearances when just a few years back he was everywhere, Marvel Team-Up, Marvel Premiere, Giant-Size etc.

It would be another year still before we next saw Werewolf in a comic (Spider-Woman #19, 10/79). This makes Spider-Woman #6 the only Werewolf appearance in comics for almost a two and a half-year period!

The book gets no love: the last CGC 9.8 got $40 and the last CGC 9.4 got $25. I know this is no retirement fund book but it should be worth more than the market is giving it now. Buy freely, I think the cream will rise to the top eventually.

Go out and hunt down crisp tight copies from guys that will regret selling them to you the moment you bring the book up to the counter.