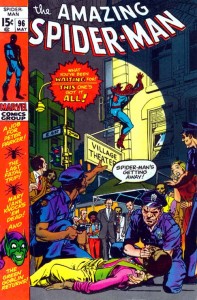 This week I am turning the Undervalued Spotlight reigns over to guest writer Nelson da Rocha. Nelson is arguing that Amazing Spider-Man #96 deserves better than it is currently getting and I agree. Nelson gets to the heart of something I’ve briefly touched on in my Undervalued Spotlight #84 and #99.

Comic book history contains pivotal issues whose unforeseen repercussions set off chain reactions that truly shaped the comic book world and I’ll back Nelson’s arguments that ASM #96 is one such book. Let’s turn things over to Nelson.

Over the past decade I’ve really taken a different approach to how I view comics and it started with Civil War. Although I was ultimately disappointed in how Marvel’s Civil War ended considering how much I enjoyed the opening, regardless, I appreciated that this was a series that reflected our times. It wasn’t that long ago but that ‘period’ post 9/11 was pretty screwed up, socially and politically (and we’re still dealing with the ramifications of security vs. Freedom) and Civil War did a fairly successful job of, at least, capturing the America’s tone.

I remember hearing stories when I was younger about Japanese Internment camps during World War 2 and asking myself, ‘how could people let this happen when it’s clearly violating people’s human rights?’ The answer, as it turns out, is, ‘very easily’. That’s what Civil War’s greatest contribution is. The tone of the opening issues captures the bizarre zeitgeist quite nicely. So much so that I believe thirty years from now people can look back and say, ‘if you want an idea of the climate of post 9/11 America, watch movie X, read book Y, and check out Marvel’s Civil War for an interesting take on things.’ But that got me thinking, how do past comics reflect the times they were created in? When you look at comics via their supposed ‘Ages’ (that is Golden, Silver, Bronze, etc.) you see interesting patterns develop. Notable shifts in tone are almost subtle in some cases but blunt in others.

Again, like Civil War, comics in these ages could only have been created during these times – and I’ve really developed a whole new appreciation for them. Early Silver Age reflects a wonderful tone of the Nuclear Age. There’s an inspiring sense of, ‘the future has no limits’, but as the years go on and the Cold War heated up, you could almost taste the paranoia, propaganda and patriotism.

We could go on about the Silver Age forever but my favourite age of comics is quickly becoming the Bronze Age. Comics really do grow up during this period, and I don’t mean to sound pretentious, but when you consider that Batman ’66 was a reflection of comics at the time, not surprisingly, comics took a decidedly different direction. What I enjoy the most about Bronze Age comics is, once again, the tone is a reflection of the times. Social concerns are now prominent, heroes with questionable morals become popular, minority characters are more frequent, and horror comics make a resurgence.

Now with all that being said, this comes from the Wikipedia entry for Bronze Age of Comics: There is no one single event that can be said to herald the beginning of the Bronze Age. Instead a number of events at the beginning of the 1970s, taken together, can be seen as a shift away from the tone of comics in the previous decade.

That’s interesting but I completely disagree. Simply put, Amazing Spider-Man #96 is, flat out, one of the most important comic books ever made and it’s all because of the Comics Code Authority. Quick overview for those unfamiliar, the Comics Code Authority or CCA was a body created by publishers to self-regulate content released in comics. It was the product of a moral panic during the mid 50’s created by psychiatrist Fredric Wertham’s book Seduction of the Innocent, which outlined a link between juvenile delinquency and comic books. Comics became public enemy number one, leading some cities to organize public burnings. Hence, publishers agreed to self-regulate via an authority following a set of agreed upon rules. Some of these rules were:

Yeah, I think we can all agree these are terrible, but it did allow for some creative storytelling and helped build the underground comics scene. As suffocating as these rules were, it was only a matter of time before they changed – and it changed with this issue.

As the story goes Stan Lee was approached by the Department of Health to do a story about drug use. He did and it was immediately rejected by the CCA. Marvel went ahead and published the issue without the CCA Seal of Approval. Marvel’s initial request in late 1970 to print this issue was denied but did trigger a review of the code which led to the loosening of some restrictions on Feb 1971. The industry quickly took advantage. You can look at the titles available in the 1970’s to see how those changes came about.

For the actual issue itself, let’s be fair, it’s a pretty unremarkable Green Goblin story. Written by Stan Lee with art by Gil Kane and John Romita, this is the first of a three part story arc; the next two issues also not receiving CCA approval.

Now here’s what I find interesting, a 9.2 of this issue is listed for $200 in guide. I’ve seen it go for much less in shops. I managed to pick up a VF on eBay for $30, and I’ve seen it go for less. Did you read that? I picked up a comic that, if it had never happened when it did, our beloved comics industry would be very different, for $30.

Would the Punisher still have been created? Maybe…

Would Speedy be doing heroin on the cover of Green Arrow/Green Lantern? Nope!

Howard the Duck? Luke Cage? Marvel’s horror line? Possible, but what would they look like?

How would this have affected the underground comics?

Would there have been a Conan the Barbarian film starring Arnold Schwarzenegger? …yeah think about that. Granted, Conan as a comic launched before the CCA revisions were made, but would it have been as popular if it adhered to the CCA code of 1954? And as per director John Milius, this film only exists because of the popularity of Marvel’s Conan comics.

Now don’t get me wrong, I’m not saying these things wouldn’t have happened if ASM #96 never came out, nor am I ignorant of the role direct market distribution played – what I’m saying is if they did, they would look very different than what we’re familiar with.

A big part of the comic industry we have today was shaped by the direction taken after Amazing Spider-Man 96 was released.