My real love for adventure stories started for me when I was 10 years old, and my Grade 5 teacher, Mrs. Nethercott was responsible. She read a chapter or at least several pages a day, in the afternoon, and from that I was hooked. I was mesmerized by the story of Tarzan and the exquisite prose of Edgar Rice Burroughs!

This lead me to Jules Verne and Alexander Dumas and Zorro and that lead me to the Fantastic Four and Spider-Man.

I am sure that since this story of a baby raised by apes remains a favorite of mine, it is  because of the nostalgic place it inhabits for me. Tarzan is not the most popular character in the comic book universe at present but it is a story that transcends comics. Much like Bram Stoker’s Dracula transcends the Dracula genre.

Many people have never read either of these books, and if you are one of them, and obviously you are reading this as a comics fan, I encourage you to pick them up. Especially if you do not like the genre of either the jungle hero or the prince of darkness; and I don’t mean Ozzie Osborne either.

I just recently reread Tarzan of the Apes. I picked up about 10 books in the series printed in the early 1900s. Not first editions or anything but old enough to have that …scent. You know the acid and ink scent you find in old comic books. I was surprised at how much I enjoyed it and how, for lack of a better word, adult it was, and downright violent.

The best comic book adaptation in my mind is the DC comics run of 1972. Joe Kubert, who started in the comic book business when he was thirteen years old as an assistant on Voltan in Catman comics. He was an inker shortly after that at DC and then became the regular artist on Hawkman as well as a ton of Golden Age heroes. After serving in Germany he pioneered 3D comics and later created Sgt. Rock and Enemy Ace. 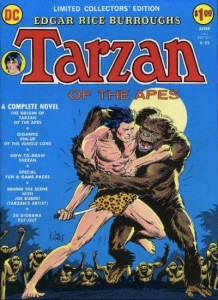 Joe started out in comics as a result of his love for Tarzan, and especially Hal Foster’s version of him that was published in the newspapers as he was growing up. In the late 60’s DC negotiated for the rights to Tarzan and Joe Kubert came full circle, and was the writer and artist to adapt the Ape Mans novels to comic form!

DC’s Tarzan started with issue # 207 in 1972 and was it a beauty! Now as I was a huge fan of Marvel and didn’t really follow DC too much, I kind of missed it until DC published an oversized issue measuring about 10″x14″. Like the Marvel Treasury Editions.

I quickly realized that wasn’t the case, but instantly became a Joe Kubert fan! The Kubert run can still be picked up in NM/Mint for very reasonable dollars, and is well worth it. His adaptation of the world of Edgar Rice Burroughs is a fantastic addition to any collection.I picked this monster up and was blown away by Kuberts’ work. I am a Big John Buscema fan and I was amazed at this guy who was equally as good anatomically and was a great storyteller as well! I even wondered if they were one and the same only under a pseudonym.

Here is a link to the New York Times notice of his passing.

Celebrate this master storytellers work !You will be glad you did!