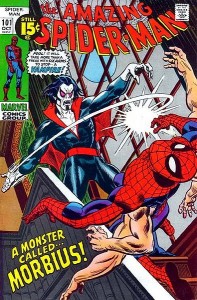 The issue marks the first time Stan Lee did not script Amazing Spider-Man. Stan the Man had his hand in the first 100 but passed the pen to scribe Roy Thomas for this issue. ASM #101 is truly the end of an era.

While the Stan Lee era ended with this issue another era had begun.

The cheat notes version of the story goes like this. The Comics Code went through a bunch of revisions in 1971. The most famous incident of course was Amazing Spider-Man #96 – 98 (May-July/71) not getting the Comic Code approval because the issues contained a drug use story. This drug use story was sanctioned by the US Health and Education authorities to help raise drug awareness among kids. The Code eventually relented and allowed drug use depiction in comics under certain guidelines (drug use is bad etc.).

Anti drug and anti corruption stories were now deemed beneficial in a public service sort of way. Notice the blatant

drug use on the actual cover of Green Lantern #85 (Sept/71), this was made possible by the updated code.

Wow, did I ever totally digress!!

Early in 1971 the Comics Code relaxed it’s restrictions of the depiction of supernatural monsters like werewolves and vampires. Of course there was a short leash given regarding content but at least the comic book publishers could once again get spooky.

Morbius, the Living Vampire was created by Roy Thomas and Gil Kane. Marvel waded softly into this newfound artistic freedom writing Dr. Michael Morbius as a living person who’s inflicted with vampire abilities while trying to develop a cure for some rare blood disease he had (remember that science gone wrong had been working great for Marvel for a decade up to that point). Though Morbius was a bad guy in Spidey #101 he did later take on a protagonist role during his 12 issue run in Adventure into Fear (#20-31, Feb/74 – Dec/75) and beyond.

Marvel quickly added more macabre to their line up. Classic literature monsters Werewolf, Dracula and Frankenstein were published and Marvel created Ghost Rider and Blade among others.

Werewolf was Marvel’s first adaptation. Marvel Spotlight #2 (Feb/72) carries a, what seems, too high 9.2 Overstreet price guide price of $400.00. Surprisingly it trades at over 90% of its guide value at the CGC 9.2 grade.

Ghost Rider first appeared in Marvel Spotlight #5 (Aug/72) and this book has settled in as the most desired of all the Marvel monster stuff from this era. The 9.2 guide value is a beefy $500.00 yet the book is still trading at around 135% of guide in the CGC 9.2 grade.

Tomb of Dracula #10 introduces Blade the Vampire Slayer (July/73). Another original Marvel creation, this book’s guide value at the 9.2 grade is $375.00. For some reason this book is trading at only 80% of guide in the CGC 9.2 grade. Too low are my thoughts especially considering how relatively well the earlier non original titles are doing. Perhaps Tomb of #10 could be a future undervalued spotlight?

Sorry for seeming longwinded but I’ve added the above data for comparative value.

Currently Marvel calls upon Morbius for Legion of Monsters projects but the character is underused. We’re passing through a golden age of Vampire fiction and it puzzles me why Marvel has not attempted to do more with the Morbius character. Luckily there is still time.