This past weekend Captain America: The Winter Soldier premiered in theatres.  I have been anxiously waiting for this movie, not only because it is the next installment into the Marvel Cinematic Universe, but because Captain America is one of my favourite characters. 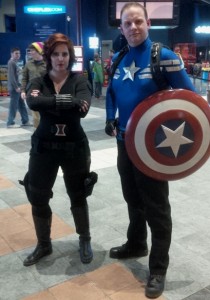 With the new movie coming to theatres, I also thought this would be a good opportunity to update my Captain America costume to look more like the new movie.  I started working on the costume (with a some help from my cosplaying team-mate Stephanie), and all I needed was the correct forum to show it off.  The movie theatre.

Stephanie (who dressed up as Black Widow) and I teamed up with Big B Comics in Barrie, and we set up at table at the Galaxy Cinema.  We were there to help promote Free Comic Book Day at Big B Comics.  All in all it was very successful.  Our costumes went over really well with the crowd, and we were allowed to make a presentation to the crowd before the start of every Captain America movie.  The crowd was very receptive and engaged, and depending on the crowd, at least a third of them knew about Free Comic Book Day (which is May 3rd), and there were several people who didn’t know about it, but came back to the table for more information. 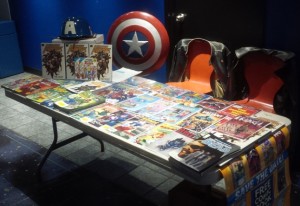 We walked around the hallways and the front foyer of the theatre, greeting movie-goers and posing for pictures.  The kids really loved it… and some adults too.

After the evening we kicked back and enjoyed a viewing of the new Cap movie… but more on that later.

It was great hanging out with some cosplay friends at the movies, but it was a completely different experience.  The crowd at the Scotiabank Theatre at 12pm is a completely different crowd than home.  The crowd was much older, with more adults than kids.  The majority of the movie-goers a that time of day were there for a presentation of the Opera so we had some stares and glares directed our way.  It was an odd feeling, but I guess that comes with the territory of getting dressed up as a Super Hero. 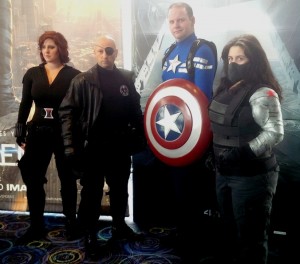 After the movie we headed over to Silver Snail Comics.  Stephanie and I were interviewed by a web video-blog site (I’ll post more on that at a future date).  We were asked about the movie in general, and the work it took to put into being a cosplayer.

It was a nice relaxing afternoon at the Silver Snail.  I had the opportunity to talk to a few of the patrons about Captain America, Cosplay and the upcoming Fan Expo. 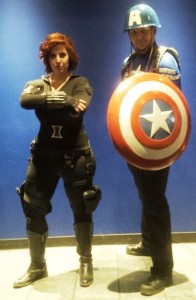 It goes past being in the genre of Super Hero or Comic based.  It is a fast paced action, spy thriller.  The cast in the movie is unbelievable and without giving too much away (because you need to see it)… Captain America: Winter Soldier will change the Marvel Cinematic Universe forever.  You need to see this movie… and if you haven’t you should avoid Marvel’s Agents of S.H.I.E.L.D. this week if you haven’t.   AoS is using the hashtag #itsallconnected, and if you have been watching the show, it will blow your mind on what happened in the movie.

Captain America: Winter Soldier shows Captain America as the hero he should be.  In the first movie, Cap was considered a joke, but after his first mission, he started becoming a leader and a hero.  The Avengers showed him as a member of the team, but it wasn’t until the end of the movie it showed him as a true leader.  Winter Soldier shows Captain America as a true leader, and a formidable fighter.  To tell the truth… he is “bad-ass” and can go toe-to-toe with anybody (who isn’t gamma powered or a God).  The other thing I really liked about this movie is they showed the true strength of Captain America.  According to some of the Marvel details about Cap, he can bench-press 1200 lbs and can run a mile in 73 seconds.

All in all it is an amazing movie, and as Stephanie said yesterday… she gives it “5 Captain America Shields out of 5”.