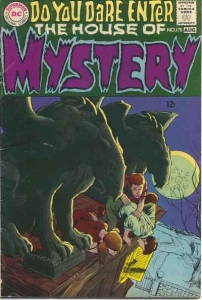 Undervalued Spotlight fan Todd emailed me a while ago with a great suggestion. Todd asked what I thought of House of Mystery #175 and I said I loved the book, with #174 stealing all the thunder #175 was just the type of book I love, way under appreciated and way undervalued. I asked Todd to put his pen where his mouth was (I’m not sure I said that right) and he answered with a great write-up championing his pick. So let’s pass this thing over to this week’s guest Spotlight writer Todd…

We are introduced to Cain the caretaker, host of House of Mystery in issue #175 dated July-August, 1968.  Though I am not certain, I believe that the idea for a host for the title was developed by Joe Orlando who is credited with writing and illustrating the splash page Cain first appeared on in issue #175.  It is strange that Cain didn’t make his first appearance an issue before in #174 when D.C. decided to change the format of the title from fantasy/science fiction to horror/mystery stories. This change elevated the title from mundane and formulaic art and stories to exciting and off-beat yarns that featured great artists like Bernie Wrightson, Neal Adams and Alex Toth. D.C. also made a similar all around change a bit later with its counter-part House of Secrets title in issue #81 where Abel, (another host and not surprisingly Cain’s brother) is introduced.

There are several interesting points that led me to choose this issue for the Undervalued Spotlight. Firstly, and most importantly, the introduction of Cain contributed greatly to setting the mood and future development of this long running title.  Cain, unlike other publisher’s (E.C. or Warren) past comic-book story hosts, plays a larger part in House of Mystery.  Being the solitary figure in a creepy old house would make you think that Cain would come across as melancholy, morbid or disturbed; but Cain possesses a bespectacled wit and charm that make him likeable from the start.  He is a clever punster always adding a fiendish or humourous twist to his one-liners. As the title and his role as its host developed, Cain looking from a distance, became somewhat of a contemporary social commentator who continually reminded his readers that individual and social ills are problems we all experience and struggle with.  He also takes on an unusually deep and introspective role with his narrative, often adding a perspective I failed to see.

Secondly, House of Mystery with Cain as host would make for a neat made for television series.  The quality of the title’s stories is exceptional from a satirical, humourous and ironic perspective; literary devices that are essential to good storytelling.  Similar to the Twilight Zone, a television series would not only have the widely appealing and in-vogue horror genre going for it, but it could also draw from the classic stories of Poe and Lovecraft with a modern take.  Finding the right writers and actors would definitely make House of Mystery an appealing series for all ages.

Thirdly, House of Mystery #175 as a comic worth investing in has some good things going for it. Firstly, I believe this book is tough to find in higher grade; if you can find one in very fine or better condition at a good price snatch it. (I tend to be a comic investor who equates the value of a title in relation to its accessibility in higher grade.) Moreover, the front cover’s deep greens and blues easily show creasing and wear. Additionally, the poor paper quality and fragility of 1960’s D.C. books makes it even more difficult to find this gem.  I’m very happy with the CGC 8.0 I own.

The current Overstreet guide has the following grades and prices:

The guide has for the first time also separated #175 into its own line.

House of Mystery ran for 321 issues from 1952 to 1983.  Cain the caretaker was an integral and identifiable contributor to this longevity.  He helped to establish D.C.’s reputation as a consistent purveyor of well written horror and mystery stories.