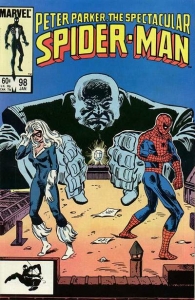 We were discussing the Undervalued Spotlight at the shop yesterday and I was floating around a few of the books I had in mind for this week’s installment. Thankfully our resident comic book whiz Dylan broke the silence and stares of bewilderment with a great suggestion of his own.

Though we will be featuring #98 I encourage you pick up a copy of #97 (featuring The Spot’s alter ego Dr. Jonathan Ohnn’s 1st appearance) and a copy of #99 and #100, each with ridiculously cool Spot covers.

First I’d like to say something about the much maligned Spectacular Spider-Man title. This title ran from 1976 through to 1998 and it gave us a lot of great comics, more than one would suspect. We get the highly collected #1, the great Miller Daredevil issues #27 and #28, Cloak and Dagger’s #64, Tombstone in #138, the Maximum Carnage issues above #200 and a whack more I didn’t mention.

Forget trying to collect the Amazing Spider-Man run; it’s an impossible task in this day and age. If you want to collect for the sheer fun of building a complete run and you’re a Spidey fan then gun for those 263 issues of Spectacular Spider-Man. Years of fun await.

Dr. John Ohnn was a scientist working for the Kingpin who somehow created a black circular inter-dimensional portal. After jumping into this portal Ohnn re-emerged cover with black spots all over his body. These were portals which he was able to jump through into other dimensions and then jump back.

Don’t shrug this issue off. I’ll have you know that the past few years have seen the rise and rise of many similar comic book creations. Basically this is a very cool villain, one they can obviously have a lot more fun with and…he’s Dylan’s favorite Spidey villain.

The 45th Overstreet price breaks for this book is $6 in the 9.2 grade split.