The online market has turned many collectors into dealers who prefer to focus solely on the more lucrative first appearance of popular characters, adding to the competition for “key” books. But unless you have access to a stockpile of “key” books, your inventory of resalable books will eventually run out. As such, sellers have had to utilize a variety methods to find books that they can resell. There are all kinds of methodologies, each with its own risk to reward ratio. Many of these methods require that you stay current and be tuned in to what’s happening in the market. The ability to interpret, comprehend and execute are critical, all of which requires effort. However, if you’re already immersed in comic culture, it’s a good way to leverage your passion and make some gains.

The simplest way to pick up new stock is to go out into the wild and search for it. I have observed that comic prices in a big city like Toronto tend to be higher than most smaller neighboring cities like Hamilton, Barrie or Niagara Falls. A big city like Toronto has the population and is supported by big business but all this is reflected in the high cost of living, as well as the high cost of playing, i.e. hobbies. So if you happen to be outside your big city, make an effort to pop in to a small town store. It’s not uncommon to find books that sell for $100 in Toronto for $50 or less. 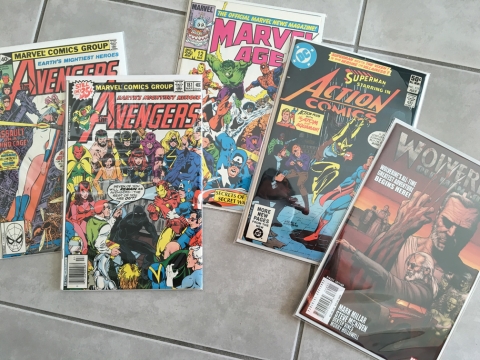 This nice sharp copy of Avengers #195, the first brief appearance of the Taskmaster cost me $7. Avengers #181 has a slight spine roll but still dirt cheap at $4. Marvel Age #12 is the first introduction of Spidey’s black costume and it was a steal at $1. Action Comics #521 used to be a much hotter book when there was a possibility that Vixen could be featured in the Suicide Squad movie but at $3 I couldn’t pass it up. A mint copy of Wolverine #66 was picked up at cover price, which didn’t seem like a big deal at the time of purchase but after the Old Man Logan storyline was announced for Wolverine 3, it turned out to be a good move. All these books were picked up at two different stores just outside of Toronto. Swing by any show in a big city and you’ll see these books selling at many multiples of what I paid. If you’re going to be outside of your city anyways, do make the effort to pop in to a small town comic store. If you can’t find any books you like, stock up on supplies.

We’ve discussed “pressing” before and I think most of us like to tap into the movie hype these days. And of course, speculators and dealers are always on the lookout for people willing to liquidate their large collection at a wholesale price. But the practice I’d like to focus on requires deep thought and the ability to see what has not happened yet. We all have some degree of intuition and being able to predict where a market is headed can really pay off.

The basic premise is this: If you know that a “key” book is worth, say $2000, as supported by past sales, eventually the previous wave of buyers of this book will start asking for more in order to compensate for selling fees and to make some gains. People looking to resell will begin asking, say $2500. If you begin to see that the majority of the asking price is coalescing at $2500, it may be time to start buying up whatever is left over at $2000. Once all the $2000 books are gone, the next sale will most likely be one of the $2500 books. The sale will get recorded and this reference will make it easier for the next buyer to make a purchase at $2500 until an upward trend is formed and the cycle repeats itself.

Not too long ago, I reported that the market has been retracting since November of 2015. Many of you also noticed this and offered explanations such as holiday bills, a strong US dollar or a lack of interest from foreign buyers as the culprit for the slow down. Soon after, on February 27th, Berkshire Hathaway released their annual letter to shareholders. Warren Buffet reported that there was negative sentiment in the US due to all the presidential hopefuls painting a gloomy picture of the US economy. As part of their campaign, they’ve all been touting that the US economy was weak and in trouble and only they had the answer. Apparently, all their rhetoric has taken a toll on the American people but Warren Buffet says that America is actually in great shape:

“It’s an election year, and candidates can’t stop speaking about our country’s problems (which, of course, only they can solve)… that view is dead wrong: The babies being born in America today are the luckiest crop in history.”

Warren Buffet is a very influential person to say the least, and people take what he says to heart. I don’t know if Berkshire Hathaway’s letter was the catalyst but the comic market seems to have leveled out since it’s release and many of the books I reported as trending downward appear to be changing direction. I think it’s too soon to say that we are back in growth mode again but things do look hopeful.

Due to five months of contraction, the recent comic sales figures appear low, but the asking price for many books remain high, continuing from where they left off from back in November, probably from sellers who purchased books before the market softened. However, there are still a good number of sellers who are using the recently deflated sales figures to price their books. In other words, buying at current GPA prices seems like a bargain to me right now, especially against the higher asking prices from before the pull back.

How did I come to this conclusion? Early key issues of Fantastic Four has really appreciated over the years. I’ve been looking to pick up a nice copy of Fantastic Four #52, 8.0 at around $1000 when I noticed that many people were asking $2000 to $3000 for an 8.5, a huge premium for half a point. And sure enough, one sold recently for $2150 making the previous GPA numbers from the past 5 months seem like a real deal. The gap between 8.0 to an 8.5 has now widened, which probably means that the 8.0 will get pulled up proportionately soon enough, so I need to find my 8.0 really fast! Joking aside, I see similar patterns with other books that I’ve got my eye on. GPA numbers from the past five months still appear low but good quality books, especially those that are tied to a movie or TV show appear to be on the move again and you may be able to use the current low sales figures to negotiate a better price. 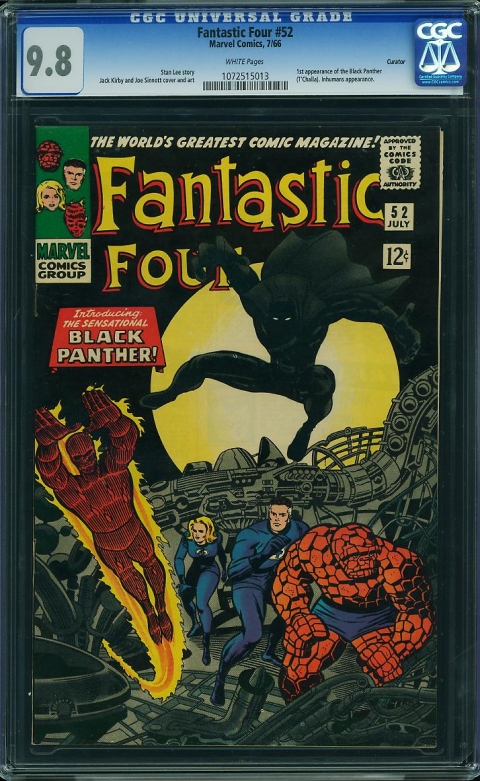 The record breaking sale of a Fantastic Four #52, 9.8 on Heritage, which sold for $83,650 on Feb 18, seems to have helped set a trend for another copy to sell for $90,000 on ComicLink on March 8, which should help to buoy many of the lower grades as well. With only four known copies in existence at 9.8, the first appearance of the Black Panther has blasted past the long time favorite from the series #48. Being the first African super-hero to be featured in comics and in the upcoming Civil War movie, as well as his own film scheduled for 2018, this book has exploded to say the least. Experienced buyers know not to buy books at its peak, but considering all the factors at play here, it has me thinking that there’s still room for this book to climb even higher. Seeing as how so many of the Fantastic Four books from this period has shot up in value, with the exception of #48, this has me wondering if the Silver Surfer is now undervalued. Unfortunately, Silver Surfer is owned by Fox and they don’t seem to know what to do with him.

Considering the markets shift toward “key” books, it’s very difficult to find good books at wholesale prices. Sellers know that they will end up having to pay more down the road if they ever want to get the book back. So at some point, you just have to jump in or risk missing the boat. People often ask for my opinion and I always reply that it’s better to “overpay on a quality book as opposed to underpay on a junk book”. From an investment perspective, buyers should be focused on growth potential as opposed to how cheap a book is because value is relative; $20 spent on a junk book is $20 out the window, $2000 spent on a quality book is $2500 down the road. Some people understand this, while others are skeptical, thinking that I’m trying to get them to overpay on a book. However, I’ve had many people approach me at shows who’ve expressed regret for not taking this advice and feel that the opportunity to jump into a quality book has past. Admittedly, the market as a whole has experienced tremendous growth during the past five years or so. However, if my observation is correct and the market is starting to shift again, we may be presented with an opportunity to buy books at last years prices. For most books, this won’t mean much but for books like Fantastic Four #52 the stimulus factors are in place for this book to take another leap forward. Things could change of course or I could be wrong about what I am seeing. But the market appears to be improving so I wanted to get the word out so that all you readers can take advantage of this current shift.

Charlie Kim is a designer who is currently transitioning into teaching. While working for various companies, he helped develop many international brands such as the Hong Kong Airport identity, Lenovo’s sponsorship program for the Beijing Olympics and Lavasa, a new city being developed in India. Locally, he's also worked on the 1998 campaign for the Canadian Opera Company, the Canadian Innovations stamp for Canada Post and the terrible Grand & Toy re-brand (hey, they can't all be winners). Charlie’s love affair with art and design all began with comics.
Articles: 50