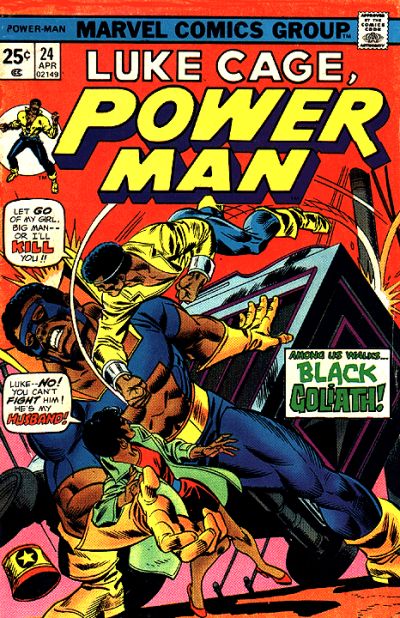 I was pricing some comics for an upcoming Con and came across a nice tight Black Goliath #1. I wasn’t sure how to price it because I knew the Guide was a bit behind on the book and online things looked stalled. Then I thought, could this be a potential Spotlight pick? I decided against choosing Black Goliath #1 but I do want to thank it for leading me to this week’s Undervalued Spotlight pick, Power Man #24.

Dr. Foster was a biochemist assisting Hank Pym in the lab, we all know that Hank Pym went from Ant Man to Giant Man. Eventually Foster gains the Pym formula and Black Goliath is born.

I can’t believe how well Fantastic Four #52 (1st appearance of Black Panther) has been doing, the comic continues to set new highs across all grades. The Panther’s appearance in the latest Captain America movie was one of the highlights and buzz for the character continues to grow.

I’m seeing the same growth in interest and demand in Luke Cage, Power Man. The character’s inclusion in the Marvel Netflix schedule has everyone wanting a copy of Hero for Hire #1 (his 1st appearance).

Of all the great African American heroes Marvel created in the Silver and early Bronze Age Black Goliath is the one yet to see that big spike in public awareness, interest, demand and then price. I’m not afraid to predict that those are coming.

There is very limited activity online for graded copies of this book though things look like they are starting to heat up.

Power Man #24 is still in store bins and convention dealer bins, yes some have pulled the issue out and are beginning to speculate on it but many others continue to allow it to sit in those long boxes just waiting for you to come and find it.

Black Goliath is a character that can fit into so many scenarios, you can bet Marvel will start using the character in media other than comics. The character needs more public awareness and I have a strong feeling Marvel will provide it.