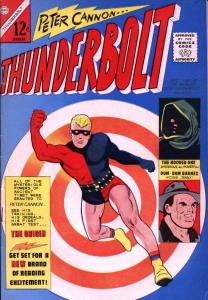 Alan Moore’s old Watchmen comics from the 1980’s are heating up. The big fuss is that DC Comics is bringing the Watchmen into the DC Universe continuity. It looks like Dr. Manhattan will play the major role in the whole thing.

I read years ago how Alan Moore basically used old Charlton Comics heroes as the prototypes for his Watchmen characters. It was Steve Ditko’s Captain Atom that morphed into Dr. Manhattan. I immediately thought of Space Adventures #33 the March 1960 Charlton issue that introduced Captain Atom by Steve Ditko. The Price Guide has a healthy $900 as the 9.2 price for Space Adventures #33 but I know that’s way out to lunch because I sold my CGC 6.5 copy a few months back for $1,395, that’s over 6 x Guide!! A CGC 4.0 copy sold for just under 6 x Guide a few months before that. I do recommend Space Adventure #33 this week as well, it should shoot up even beyond it’s current lofty values but this week I wanted my actual pick to be a little less glamorous and a little more attainable price wise.

This week’s Undervalued Spotlight shines on Thunderbolt #1 featuring the 1st appearance of Thunderbolt.

By any measure this comic is undervalued. We’re talking about a superhero introduction #1 issue from early 1966 that has a Guide value of only $60. Thunderbolt was part of the deal that sent all the Charlton superheroes over to DC back in the early 1980s, I’m not sure what Charlton got in return, perhaps all the romance titles? Anyway Thunderbolt appeared in the Crisis on Infinite Earths and went on to carry his own DC title which ran 12 issues.

Peter Cannon was an orphan who was raised in the Himalayas in a lamasery where he learned and mastered the discipline of mind over matter and had the capability of using parts of the brain the rest of us couldn’t. The result was Peter Cannon, Thunderbolt capable of tasks that seemed impossible to us regular folk.

The Thunderbolt comic is credited with conveying some of the earliest respectful presentations of Eastern Mysticism in American pop culture according to the Wiki.

What is really going to ignite this book though is its connection to the Watchmen. Thunderbolt is identified as the prototype to the Watchmen character Ozymandias. While this connection has helped it attain healthy values in the past couple of years I’m betting on this new DC announcement to draw more attention to these old Charlton charaters.