Collecting comics has slowly changed from a “collecting the run” based hobby to a “collecting the keys” based hobby. In a way this trend has produced an unexpected side effect, it has shown us which titles have given the most to comics. I’m not going to drag any other title through the mud right now just to prove my point instead I’ll state the obvious in that Amazing Spider-Man is so littered with keys, semi-keys, iconic covers, books of historical significance, books that changed comics etc. etc. etc. it ends up being one of the rare titles that practically forces a collector to go after the whole run because chasing down the keys will get you almost half way there.

Amazing Spider-Man #50 features the 1st appearance of the Kingpin. The Kingpin is getting all kinds of great exposure through the Netflix Daredevil series. Actually Kingpin’s most famous arc may be the Daredevil Born Again story line in which Spidey makes a wickedly good cameo. Nonetheless the Kingpin started as a Spider-Man villain and his ability to play the villain to other characters proves his versatility. He’s one of the main players in the whole Hell’s Kitchen corner of the Marvel U and that corner is getting lots of attention these days and will continue to do so in the coming years.

The Kingpin is high up on the A List of Spidey villains, I’m not going to say he’s ahead of the Green Goblin but the Kingpin somewhere near the top and that’s saying a lot considering all the great villains introduced in the Amazing Spider-Man run. 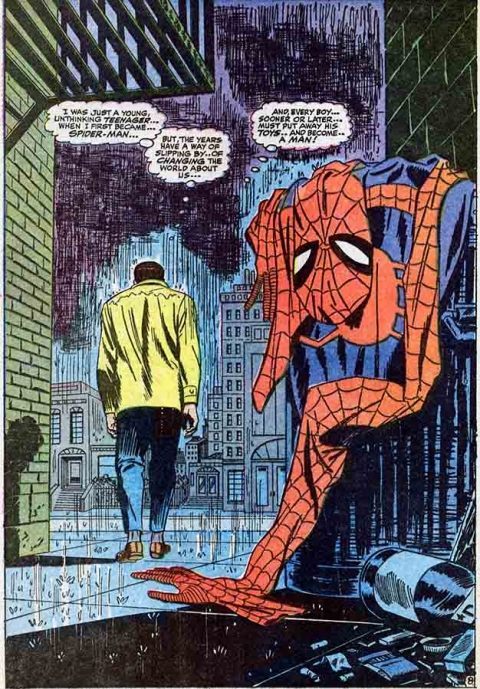 Amazing Spider-Man #50 delivers one of the most iconic covers of the Silver Age, maybe Romita’s best of the run, certainly a revered classic. The cover image has been modified and used countless times by Marvel and other publishers. Inside there is also the famous splash panel that shows Peter Parker walking away from a garbage can where he just threw his Spidey suit, this panel itself has been copied countless times. This is an important comic book cover.

Amazing Spider-Man #50 will not jump to $4,000 next year but I do consider it an affordable (in high grade) Blue Chip that will stand the test of time. It will be one of those books that will always be in demand, a welcome and stabilizing addition to any collection.