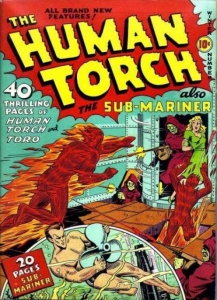 A couple of months ago a long time collector walked into the shop with a small pile of choice Golden Age. We picked out the best candidates for grading and sent them down to Florida with a good luck kiss and a prayer.

The highest grade of the batch, a Human Torch #3 (2), is this week’s Undervalued Spotlight (this copy came back a CGC 9.0 btw and I’ve been bugging the owner to allow me to sell it for him – he’s thinking about it…).

Human Torch #3 as we all should know is really Human Torch #2 and #2 is of course really #1. The confusion stems from the fact that the title continued on from Red Raven #1, which did not have the Human Torch in it at all.

The Human Torch first appeared in Marvel Comics #1, October 1939. His and his Marvel Comics co-star Sub-Mariner’s popularity meant each received their own title by 1940/1941.

The Golden Age comic book market has been heating up lately but it seems DC has been getting most of the love. Timely’s are definitely lagging behind but that may be a good thing if you’re looking to invest. The early Timely’s may be the most under rated Golden Age at the moment.

Of course you need to find a strong title featuring a strong character with a great cover and perhaps an extra hook to the book that’s hard to ignore. Human Torch #3(2) delivers all these things. I’d say the hook it delivers has not even been fully appreciated by the collecting community at large.

We did a little research, and unless we missed something (entirely possible) it seems that this comic features the 1st published appearance of Captain America, twice!

These were not images of the cover of Captain America #1, these were fresh Simon and Kirby images, one of them a full color Sentinels Kids Club ad! 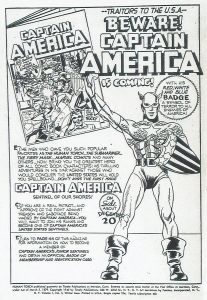 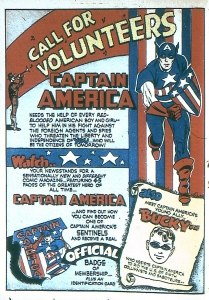 I’ve read debates on the forums on this subject and it’s obvious the market does not view the Detective #15 as Superman’s 1st appearance. The book holds interest though and can command a bit of a premium.

These pre-date ads are a bit different than say the Hulk #180 that has that one famous last panel image promising Wolverine as Hulk’s foe in the next issue. The Wolverine appearance here is continuity though and that does matter to the market.

I like the Human Torch #3 (2) because early Timely’s are currently undervalued in my opinion and more so because I really think there is something to these pre Cap #1 ads and their original, not reproduced art.

Only time will tell how the market will play out on this but I’m betting some awareness will help the cause.

Over the last 4 years this book has traded below Guide in practically all grades but the only 2016 sale had a CGC 1.8 come in just over Guide.