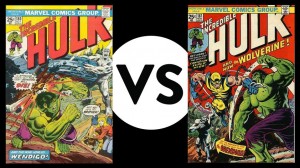 It’s All About the First Brief Appearance

As we move into the second example of a first brief appearance issue being more valuable than the first full appearance, we encounter Doomsday, who is another villain that is an integral part of Superman’s world. Doomsday’s first brief appearance was in Superman: the Man of Steel #17, which has jumped in value in this year’s price guide. A near mint minus 9.2 copy of Man of Steel #17 (first printing) now fetches $50 while a 9.2 copy of Doomsday’s first full appearance (Man of Steel #18, first printing) has increased less in value and is sitting at $30. Print run numbers are a big factor affecting these two issues, as the first printing of issue #17 seem to be in shorter supply than the first printing of #18, but the fifth printing of #18 is in even shorter supply and sells on eBay for more than the first printings of # 17 and #18, but this is still not reflected in the Overstreet Price Guide. Story-wise, neither of these issues explain much about Doomsday except to show that Doomsday is good at destroying things and to serve as a prologue to the “Death of Superman”.

Get More of Your Favourite Character in the First Full Appearance

Lets look at some Marvel issues for examples of first full appearance issues being worth more than the first brief appearance.  Fan interest in the Marvel villain Ultron has steadily increased over the past few years, especially with fans anticipating next year’s release of the second Avengers movie. Like a few other Marvel villains, Ultron’s first appearance occurs in stages. He first appears briefly as the Crimson Cowl in Avengers #54, which is currently worth $200 for a 9.2 copy, but is selling for far more online and at comic book conventions. He is then revealed to be Ultron in a full appearance in Avengers #55, which the Overstreet guide prices at $500 for a near mint minus copy, but again sells for far more due to the current interest in the movie. I think these debut issues of Ultron had decent stories, but Ultron’s origin story in Avengers #58, which includes the Vision’s origin, is even more interesting.

In conclusion, a character is introduced in a brief appearance in order to move a plot along (character was created to serve the plot), or as a “try-out” (maybe this character has potential for future issues), or as a “teaser” at the end of the comic to entice readers to buy the next issue. Characters who were introduced in teaser endings have included Apocalypse (X-Factor #5), Venom (Amazing Spider-Man #299), and of course, Wolverine (Incredible Hulk #180). In closing, it is the writer’s decision about how to reveal a new character, and the way the character is introduced will decide if the issue is a first brief/cameo appearance, first full appearance, or just a regular first appearance. However, it is the fans that drive the market demand and value for these first appearance issues.