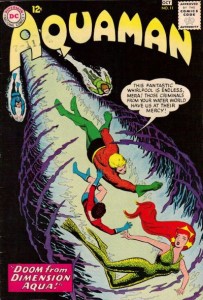 As I was pricing out the issues I noticed the Mera issue, #11, was missing. I remembered a while back having a nice copy of Aquaman #18, the issue where Mera and Aquaman get married. That issue flew as soon as I got it which the cynic in me took as me grossly under pricing it. It seemed to me that I let Mera slipped through my hands once and now, looking up the prices of early Aquaman I see she’d given me the slip once again.

My interest now peaked I poked around and found out a few things about Mera.

Turns out she is quite an interesting character, I’d say quite unconventional for DC of the day. My impromptu research on ’the one that got away’ has led me to confidently declare Aquaman #11 as this week’s Undervalued Spotlight.

Surprisingly my last Silver Age super hero nod for the Spotlight was way back in March (Spotlight #194). Mike Huddleston recently visited the Silver Age with his great Avengers #3 post but as of late I seem to have avoided this era of eras.

It’s actually been close to a year since I last featured a DC hero comic from the Silver Age. Shame on me because there are so many DC Silver Age comics currently undervalued.

Back to my pick. Aquaman #11 features the 1st appearance of Mera.

Mera is saved by Aquaman and falls in love with him, they get married, which makes Mera Queen of Atlantis, and they go on to have a son. Their child is later abducted and dies in captivity. Their son’s death strains the marriage and pushes Mera to the brink sanity. In her grief she blames Aquaman for their son’s death. She eventually leaves Atlantis returning to Dimension Aqua.

Mera is a strong and interesting character, I love her power, did you know she could increase the density of water and form it into anything she wants, meaning she can hit you with a water hammer. Her love for Aquaman but inherent hatred of Atlantis lends to great stories. The death of her son’s affect on her mental state adds more layers to this complex character.

People are starting to catch on to Mera, recent CGC sales show a 50% premium above Guide, while Aquaman #10 for example trades at 40% below guide.

Luckily for most of us the book remains affordable and attainable though by no means is it common, in fact only 13 have been graded to date. I have confidence you’ll be able to find a copy here and there in back issue bins and on back issue walls.

As an investment I can see no downside to this book. The book is relatively cheap for a September 1963 hero comic, there is obvious scarcity, the Aquaman property is now heavily speculated with a lot of attention going to More Fun #73, Adventure Comics #260 and Aquaman #1.

Aquaman #11 is an inexpensive fun way to play the Aquaman sweepstakes so if you ever come across Mera don’t let her slip away.