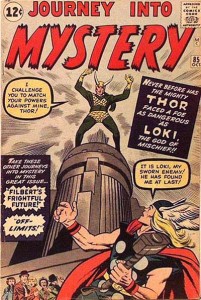 Last Saturday evening my kid decides we should all watch Thor 2; I wanted to watch the Habs/Senators game.

So Thor 2 starts and I kind of like it, I actually thought it was better than the first one. Near the end of the movie my kid mumbles something like “I really like Loki, he’s smart and crafty”. Woah!

His admiration for Loki took me by surprise. My Loki, the one that I knew and grew up with never got the same respect from me that Doctor Doom, Green Goblin or Galactus did. It’s like I never took him that seriously as a villain. Maybe it was just me, not being the biggest Thor fan.

Or maybe it wasn’t just me. I can’t tell you how many copies of Journey into Mystery (JIM) #85 I’ve had over the years but I can tell you that each successive one seemed to get harder and harder to sell.

This of course got me to thinking about JIM #85.

I took a closer look at JIM #85 and found that the book has slowly been coming to life in the collecting community. For some reason I don’t recall that the book featured the 1st Asgard appearance or the 1st brief mention of Odin or the 1st Heimdall appearance. Had I paid more attention and known these things back in the day I would have added the comments onto the backing board to help sell the damn things.

Heimdall got me to thinking about the controversy that surrounded news that black actor Idris Elba would be cast as the character in the Thor films. Elba was wonderful in the role in both films.

In a moment of cleverness I deduced that perhaps all these new fans of these old characters that are being generated from a medium different than the medium the characters were originally introduced in might start affecting demand for the comic.

Based on the massive new fan base that characters and concepts introduced in this book are getting I’ll say this book has higher heights to climb.