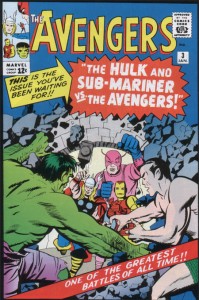 I received a very nice email from Mike Huddleston a few days back. Mike, who regularly contributes to CBD with his fantastic Arcs and Runs posts, was being a heck of a nice guy in serving me up a juicy Spotlight selection of his own. See Mike knows I’m gearing up for the big Fan Expo con next week so he thought he’d help relieve some of the pressure. Much appreciated Mike, though truth be told I’m beginning to suspect he simply didn’t like a few of my more recent selections and has decided to ride in and save the column. Both motives are noble I guess and both are appreciated.

Lets hand things over to Mike.

This post was originally planned as part of an Arcs & Runs feature called a Key to Keys. It didn’t matter how many times or ways I wrote it always came back to our feature book as the “spotlight”, and so here we are. Avengers #3 is a fantastic book all on its own, but its  a real key book when you look at it closely and the connections and effects it has on other “key” books from Marvel’s early silver age beginnings. In addition to our spotlight book we will quickly review the three connected books as they help make our book so special.

The Incredible Hulk has left the Avengers and they want him back. Iron Man projects a special holographic image of himself to other super-heroes (FF, Spider-Man, & The X-Men) requesting their assistance in locating him to no avail. The Avengers have forgotten they already have a Hulk-magnet in the person of Rick Jones and with assistance the Hulk is located. He is having no part in a reunion and the battle begins, after a quick tussle the Hulk escapes to an island with none other but the Sub-Mariner waiting for him. They skirmish as well and then form an alliance against the Avengers around pg 15 in the book. The next 10 pages have a big evenly matched battle with all parties involved. The issue ends with The Hulk and the Sub-Mariner escaping and the pursuit by the Avengers continues into Avengers #4. Avengers #3 is a great battle issue from start to finish.

Now on to the connected issues, we will look at each in chronological order.

The connection to this book is the most tenuous of the three, I probably should have used Matt Murdock to make the case but he wasn’t available. I’ll  have to wing it on my own.

Tales Of Suspense (TOS) #49 is listed by Overstreet as the first crossover for the Avengers and the X-Men (issue #3 1/64). They don’t name the number of the Avengers book (and I think I know why) but  if a number could be listed, it should be our Avengers #3. First I think the reason it is not named is because that during the course of Avengers #3 Iron Man’s meeting the X-Men (TOS#49) is mentioned in past tense prior to Avengers #3. Here is why I think the crossover took place in the Avengers #3 time frame.

TOS #49 is great book in its own right. In addition to the 2 cross-over’s this book is the 2nd appearance of the Watcher. It’s also one those rare Jack Kirby/Steve Ditko super-hero collaborations. Outside of Amazing Fantasy #15 and ASM #1 there weren’t too many others (a dozen?). The story itself is a bit hokey but endearing at the same time. I could pump the tire’s of this book all day, but we must move on to…

Well the connection here is pretty clear. The Avengers continue there search for the Hulk after the battle in issue #3 and thanks to the Sub-Mariner end up finding Captain America! I have always liked the way Stan Lee brought the Timely Big 3 back into the Marvel silver age fold, basically by using each other to do it. First he created a new Human Torch in Fantastic 4 #1. Then the new Torch brings the amnesiac Sub-Mariner back in FF#4. They trial the Captain America character with the Human Torch in Strange Tales #114. Finally the Sub-Mariner throws the frozen Steve Rogers/Cap into the ocean for the Avengers to find in this book.  Avengers #4 is one of the hottest comic books on the planet right now and doesn’t need a lot tire pumping so we will move on to our final book…

We begin this book with Thor flying over a group of young boys who are divided in their support of the Incredible Hulk and the Mighty Thor. They want to know which one of them is stronger and Thor sits down to tell them the tale of their only battle together. And guess where it took place? Avengers #3 in a previously unknown side bar battle while the rest of the Avengers were battling the Sub-Mariner. It’s a great story and the outcome of the fight is still up for debate. This book is easily one of the top five most popular Thor Journey in to Mystery comics of all time. Another Jack Kirby/Stan Lee smasher.

From an investment perspective I really like the space that Avengers #3 occupies. There is an old real estate axiom “buy the cheapest house on the most expensive street”. Avengers #1 thru #4 is pretty pricey real estate.  Avengers #3 is in the sweet spot on this block for future price appreciation…On one-side it is up against issue #2  and is priced a full $800 less than that it in 9.2 condition. On the other side it is directly connected to the smoking hot price orbital issue #4. I think it is in a good position to rise up in value against issue #2 as it’s IMO a superior book with many fine attributes (and connections!) of its own. I think its connection to issue #4 will help pull it up as well.

Avengers #3 is a blue chip comic worth owning in whatever grade you can afford. I don’t see a lot of downside for it in the near future given the Avengers current and probable future popularity in the movies and TV mediums.