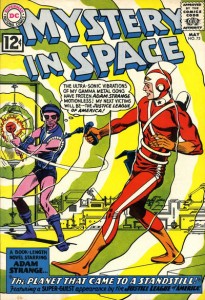 Publisher DC Comics has a good thing going in the Justice League of America (JLA). Tremendous expectations surround the team as plans for a big JLA movie take shape.

Long lead times in big movie projects like this coupled with the great expectations means the JLA will get plenty of DC’s attention for years to come.

Movie aside, the JLA deserves all the attention it is getting. The title led the way for DC’s successful launch of the NEW 52 back in August of 2011 and it has been one of DC’s best titles ever since. The JLA is selling comics and DC will want to keep it that way with stellar creative teams and strong marketing.

The nuclear engine at the core of this JLA machine is of course the projected feature film that everyone knows will come. All kinds of speculating and arm chair producing is going on as how best to schedule the lead-in to this movie that most want to see equal or best Marvel’s Avengers epic.

Actually there are still some good deals to be had with older JLA issues. My advice would be to stay in the CGC 8.0 and above grades preferably aiming for nice strong CGC 9.2 copies.

There has been very little high grade activity for the JLA title over the last year or so. I’ve sniped a few but have found less and less available and the prices have started to move up. Still diligence can score you some good books.

This week I’m here to ask you to consider Mystery in Space #75 as a good JLA investment.

Mystery in Space as a title has been bordering on comatose for years now. There are a few gems in this run though and #75 is most definitely one of them.

Mystery in Space #75 is a special book. If I am not mistaken it is the 1st true JLA cross-over.

Yes, in Lois Lane #29 (Nov 1961, same time as JLA #7) 3 members of the JLA have cameos in the 9 page “The Irresistible Lois Lane!” story drawn by Kurt Swan. You know the issue, the one with the cover where the guys are lining up to kiss Lois. I of course fully expect you to hunt down a nice quality copy of the undervalued Lois Lane #29 as well but I can’t call this issue the 1st JLA cross-over.

For me the 1st real cross-over is Mystery in Space #75. In the 25 page “The Planet That Came to a Standstill” story writer Gardner Fox crafts the tale of Adam Strange and the JLA capturing the villain Kanjar Ro. The issue boasts the DC Silver Age dream team of Carmine Infantino pencils and Murphy Anderson inks.

This is a good little book that brings some cool things to the table.

I’ve been able to pick up high grade copies for below guide, hopefully the trend continues for at least a while because I’d like to grab a bunch more.