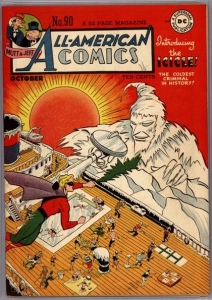 I mentioned I thought I was on to something a few weeks back in Spotlight #308. In that Spotlight I wrote that I noticed a trend towards what I called “nouveau iconic” Golden Age covers. These are dynamic covers where our heroes get second billing in the cover art to a prominent villain. I mentioned the villain is usually on the right of the cover.

All-American Comics #90 fits the bill perfectly: the eye catching cover and the great looking villain – on the right side!!

Keen minds will note that this cover was produced in October 1947, a month before the Flash Comics #89 featured in Spotlight #308.

All-American Comics #90 gives us more than a fancy cover. The book introduces the Icicle, the Coldest Criminal in History. You don’t need too much of an imagination to draw a line to Mr. Freeze and Captain Cold a decade or so later.

All-American #90 also comes from that late 1940s era where hero titles were dying off and print runs were smaller. Issues from this era are definitely a challenge to hunt down today.

There can’t be much downside to this book: picking up a solid copy gets you in the spot you want to be, picking up great comics with lots of upside well before the upside.

This would be a great pick up. Get one if you can.