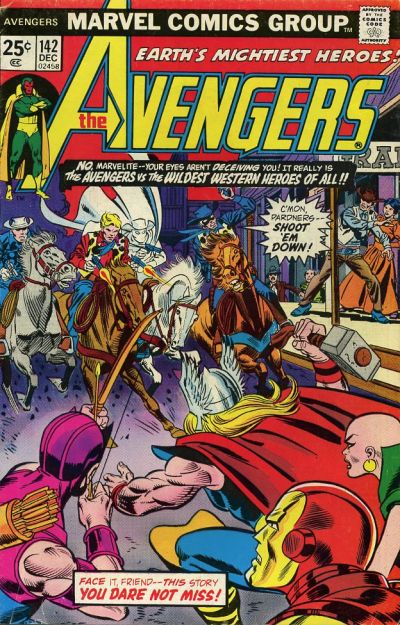 I just picked up a nice pile of Avengers and something drew me to this issue. It got me thinking…

The superhero genre long ago emerged as the dominant genre in comic books. Gone are the days of multiple publishers each with multiple titles in genres like Funny Animal, Western, Humor, Romance, War, Crime, Horror and Sci-Fi.

To be fair there are still popular and successful comics coming out in the Crime, Horror, Sci-Fi, Humor and Romance genres. Of all the genres I’d say the deepest buried is the Western. Westerns are deader than dead. Tombstone city!

The obvious problem with Westerns is that they are a period genre. All the other genres can be written in any time, in any place while the Western is automatically defaulted to a specific time and place.

Marvel Comics once had a quite the Western line up. In the 1960s titles like Rawhide Kid and Kid Colt Outlaw outsold titles like Green Lantern and Wonder Woman year after year.

Somewhere along the way the Westerns lost their luster. Two Gun Kid and Kid Colt both stopped carrying new stories in March 1968, the titles switched to reprints at that point. Rawhide Kid continued with new stories up until 1973 then it too went to reprints. There seemed to be a market for Western reprints because just after Two Gun Kid and Kid Colt went to reprints Marvel published the Mighty Marvel Western, a compilation giant sized reprint title.

By 1975 Westerns were effectively done at Marvel, Kid Colt #229 from April 1979 was the official end but you can’t really count the years of reprints.

So I’ll now awkwardly introduce this week’s Undervalued Spotlight, Avengers #142. I think we should lump in Avengers #143 as well since it concluded this story.

Thor, Moondragon and Immortus have to travel back in time to rescue Hawkeye from Kang the Conqueror and to stop Kang from taking over the world!

There’s something about this issue I’ve always found interesting and unique. The Gil Kane cover is great but there’s something off about it, the scene doesn’t quite work, the two genres don’t convey an imminent battle, it’s more like a WTF moment.

Which gets to my point on this book. Marvel has this massive stable of fantastic characters and the company can mix and match and cross pollinate better than any other publisher/film studio/tv producer. Marvel can take new characters with little history and seamlessly absorb them into long standing established franchises with great success. This uncanny and very profitable ability is what makes the Marvel stable of characters so heavily speculated. How many of us have not gone back and tried to piece together possible future scenarios for all the Marvel B and C list characters?

This is the frustrating part about all the Marvel western characters. These were A listers at a time and yet there just does not seem to be a fit for these guys in the current Marvel master plan. It seems only a time travel story to the wild west of the late 1800s can work, this time travel slant has also been tried in a Fantastic Four story from 2000 and even a Black Panther story from 2002.

Avengers #142 is an obvious attempt by Marvel to somehow tap into this great line up of Western heroes, to bring them into the superhero realm in some usable capacity. The attempt didn’t amount to much but the attempt was made and it serves as a reminder that Marvel does have these characters sitting on the shelf.

I’m not saying there is a quick and easy formula for assimilating the old Western heroes in the current Marvel U but what I am saying is that Marvel/Disney is a very innovative entertainment company and that assets like Rawhide Kid will not be allowed to sit without more efforts at reviving their popularity. I’m also saying that these characters could one day work in the Marvel U and I think that Avengers #142 will be looked upon as an important early attempt.