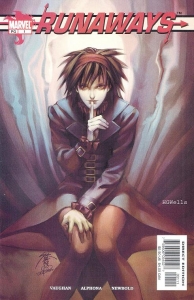 The dominant back issue market segment for more recent comics has to be the variant issue market. It’s a tough market and one to enter into with lots of knowledge and a little caution. On the other hand the market for regular, non-variant issues of comics published since the year 2000 is thin at best, a very active and successful example would be Walking Dead #1.

This all makes little sense since publishing numbers have been at historic lows during this period. Though the storytelling formats of these comics lends towards the eventual release of their Graphic Novels and that seems to be the way modern comic book readers like things.

Someone recommended the book to me and I remembered being floored by it, it had a fantastic premise, strong characters and it was a great read. Soon it became one of my shop’s bestselling graphic novels, one we’d recommend enthusiastically.

As I mentioned above, the print runs on books from this era was low, the Comichron site has circulation for Runaways #1 at 25,905.

Unlike Walking Dead, Runaways never went on to enjoy a long and successful run. Since its launch 66 issues have come out over 4 different volumes, the latest being a 4 part series in 2015.

So what went wrong with Runaways? Some sites I read point to the ever changing creative teams and the lack of consistency and direction. My view is that this is one heck of a property and Marvel knows this. I feel that there is a lot of potential here and the potential is based on sound principles like quality, past success, a known fan base etc. and not on gimmicks.

The market agrees with me as of this posting, the book has moved forward in value over the past year. I think opportunities abound though in finding raw issues. These are sitting in closets in collections amassed since 2000 and the books will also be found at comic shops and at convention booths where owners and dealers discount en masse comics from this time period.

Go out and get yourself a nice tight raw copy, I recommend you read it.

The 46th Overstreet price break for this book is $4 in the 9.2 grade split.