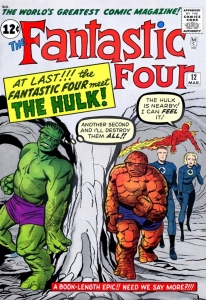 I was talking to a comic collector recently about the allure of those round 12 cent Marvels. We counted them up and came up with 45 super-hero Marvel comics that have them, remembering that Fantastic Four #1, #2 and Tales To Astonish #27 were 10 centers. These round 12 cent books have become quite a collecting strain, this guy wasn’t the 1st to be collecting these things as I’ve met many collectors over the years with a fondness for the mighty round 12 cents.

It was time for me to pick a Spotlight book so I challenged myself to see if there were any candidates in this small field (that I didn’t already pick). So without further ado I give you the fruit of my thought process and present this week’s Undervalued Spotlight as Fantastic Four #12.

I thought this one through hard and while it may not be a glamorous pick I’ll argue that it is undervalued at this time.

Fantastic Four #12 has always been an early Marvel heavyweight, for as long as I remember. Early FF’s are still highly collectible, especially #1-#13. The great Kirby cover featuring Hulk and the FF has always helped the book as has the fact that it is Marvel’s 1st cross over. The Overstreet Guide has it tied with Amazing Spider-Man #1 (also March 1963) as the 1st cross over but according to the CRMO site FF #12 hit first.

We can’t understate how much cross overs helped Marvel spread its revolution. Fantastic Four #12’s status as the start of all that adds an important hook to its collectability.

Fantastic Four #12 is also a very early Hulk, again according to the CRMO site it hit the streets before Hulk #6 making it Hulk’s 6th appearance. Mike Huddleston covered the early Hulks in one of his Arcs and Runs and he touched on how Marvel had a hard time figuring out just exactly how to flush out Hulk as a lead character pointing to the fact that the 6th issue was the last of the series.

With Fantastic Four #12 we see Hulk used a guest star, and later with the Avengers as a team member. We have to wait a year and a half, until Tales to Astonish #60 (October 1964) before we see Hulk take over a book (partially). The odd thing with the Hulk is that this same trajectory has followed him to today. The Hulk films were OK but by no means received the way movies like Iron Man, Ant-Man, Spider-Man were received. Hulk truly started lighting up the internet as a supporting character in the Avengers movies where the cry was “More Hulk!”.

Well we’re about to get more Hulk in the form of his coming appearance in the Thor Ragnarok film. There is tremendous buzz around this movie especially around the Hulk and the news that the film will visit Planet Hulk (a 2006 storyline that is one of the most popular Hulk story arcs).

What I’m saying is that Hulk is hot again and if and when they get this movie right and give us just enough Hulk it will help his brand immensely.

Not that Hulk #1, the big key Hulk comic, needs any help. It has now secured a very solid footing as Marvel’s #2 key to have behind Amazing Fantasy #15. But all the recent developments bode well for other key Hulk comics, and for me this is the Hulk character’s second biggest key issue behind Hulk #1.

The reason I wanted to feature Fantastic Four #12 this week is that I think the book has bottomed out and is set for some value appreciation.

Fantastic Four #12 has been stagnant on the markets for the last 5 years, and that is following a sharp drop in value from its peak 2008/2009 levels.

The above results are all below Guide and all seem to be near a what I think is a trough level. I see this book appreciating, especially in the 8.0 and above grades.