We continue our series on the “First Six” this month featuring the first six issues of the Incredible Hulk. This series is unique in that it was cancelled after issue #6. Commercially it might have failed, or it could have been cancelled to make room for other characters because of Marvel’s limited distribution deal with DC. It didn’t matter. The Hulk made his way to The Avengers, Tales to Astonish, and back to his own long running series. He is as popular today as he has ever been.

Jack Kirby has cover and interior art chores for issues #1-5. Issue #6 is Steve Ditko. Inking chores are shared by George Roussos and Paul Reinman on issue #1, Ditko on issue #2, and Dick Ayers issues #3-6. All stories by Stan Lee. Let’s take a look at the Hulk’s “First six”. 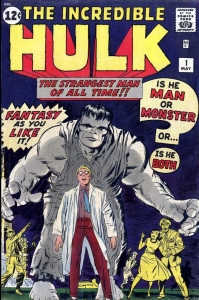 The book everybody wishes they had picked up off the news stands back in 1962. I suspect very few people back then knew just how beloved and popular the Hulk was going to become. Early 1960’s books were broken down in to “Parts” and each book had two to five of them. This one has five. Our story begins with the now famous “gamma ray experiment” and its deadly results. Doctor Bruce Banner is about to conduct the test when he spots a teenager out in the test area – Rick Jones. He races to save him – and does but the test catches Bruce Banner out in the open and baths him with gamma radiation. Doctor Banner survives the explosion and he is taken to a hospital. While waiting in a room with Rick Jones, Bruce Banner changes in to the Hulk for the first time. He is a Gray Hulk. He breaks out of the hospital and bounds in to the forest. Parts two and three echo throughout the rest of the Hulks life. He is pursued by the army who he almost always defeats, and he changes back and forth to Bruce Banner and then to the Hulk. Part four of the story also touches on another common theme in early Marvel comics that being “The Reds”. In our tale Bruce Banner’s assistant Igor (I’m not kidding) is communist spy. He sends word of the powerful Hulk to the Soviet Union or Cuba and his boss Comrade Gargoyle. The Gargoyle hops in a rocket and crash lands in the United states near the army base where Bruce Banner/Hulk and Rick Jones are roaming in a jeep. The Gargoyle confronts Rick Jones and the Hulk. He knocks them out with a special pellet gun, takes them both to a submarine, then they get on a rocket back to communist soil. In transit the Hulk becomes Bruce Banner once more and now the Gargoyle knows Banner’s secret. The Gargoyle wishes he was normal again. Bruce Banner goes to work and finds the cure returning the Gargoyle to his previous human form. Another familiar storyline from this era of comics then plays out. The Gargoyle turns on his communist masters, destroying them and himself and he returns Rick Jones and Doctor Banner back safely to the United states as Hulk #1 comes to a close. We do meet Betty Ross and her dad General Thunderbolt Ross in this book as well and they become fixtures in the life of Bruce Banner and the Hulk throughout his silver/bronze age in comics. 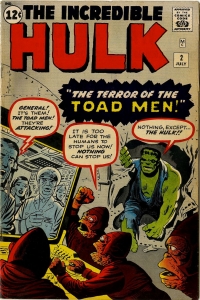 Incredible Hulk #2
July 1962
The Terror of the Toad Men

We begin this issue with the Hulk on the run being chased by the police. He is now a green hulk and there is no explanation given for the colour transformation. A brief origin recap follows and we are introduced to a new alien menace, the Toad Men who have the supreme powers of magnetism at their disposal and the conquest of earth on their mind. They are searching for the “best scientific mind “in the world to determine if this is feasible. That “mind” belongs to Doctor Bruce Banner. A series of events follows that puts the Toad Men on the attack and Bruce Banner back on earth labeled a traitor by General Ross. Bruce Banner convinces everyone they should try his gamma gun as a means of defense even though it clashes with his own ideals. He unleashes the gun on the Toad Men hurdling them back into deep space. I thought the Hulk had a “Frankenstein-ish” look to him in this book. I don’t know if that is what Kirby/Ditko were going for here or not. 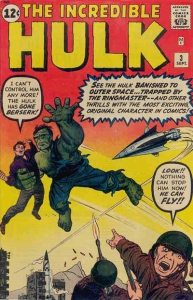 Part One of this book establishes the short-lived mental link between Rick Jones and the Hulk. This occurs after Rick Jones tricks the Hulk into taking a test flight into outer-space for General Ross. Rick finds out later that he to has been tricked and the General was lying to him, the ship was sent to space never to return. Rick finds a way to have the ship crash-land back on the planet earth. A fighting mad Hulk emerges and chases Rick planning to kill him. When Rick issues a command the Hulk responds. The Hulk was bathed in some sort of cosmic radiation and he was left with this effect. This mind control only worked while Rick was awake so he doesn’t get much sleep. More changes for the Hulk next issue.

Part Two is another Hulk origin re-telling. Three for three.

Part Three introduces the silver age Ringmaster (Maynard Tiboldt) and his Circus of Crime. As you can imagine a Hypnotist hat does work for a little while on the Hulk, but not very long, and old Green-skin trashes the Ringmaster and his badly outmatched Circus of Crime in short order. If the Ringmaster character looks familiar to golden age fans, his father Fritz was in Captain America Comics #5 1941. 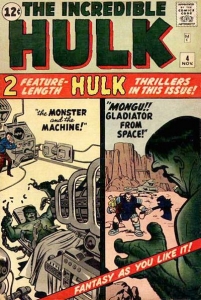 Incredible Hulk #4
November 1962
The Monster and the Machine

Another two-part story complete with a split cover. In part one General Ross continues to obsess over the capture of the Hulk. He tests a “iceberg rocket” while his daughter Betty looks on. After a subsequent encounter with General Ross and the army crew, Rick Jones uses his new-found mental control of The Hulk to protect them from the soldiers. Later back Bruce Banner’s secret underground cave, Rick Jones is trying to find a way to transform the Hulk back to Bruce Banner with the gamma projector. He makes it work and Bruce begins work on modifying the projector for future use. In the next physical trial another change takes place with the Hulk. This time (first) the Hulk retains Bruce Banner’s brain. Bruce is determined to show the world the Hulk can do good, and he sets off to save folks from a burning barn. He does but they are still terrified of him as this story comes to a close.

Part two is Mongu the Gladiator from outer space. This story and the gladiator turns out to be an elaborate ruse by the communists trying to capture the Hulk. The Hulk starts to show more of his awesome power here and easily repels the Russians. The US army which is always on the Hulk’s tail shows up after the skirmish is over. 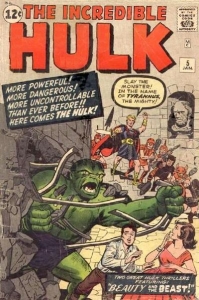 This issue features another two-part book. First up we have a story with Tyrannus a subterranean warlord who later becomes a villain of long-standing in the Marvel universe. Tyrannus wants to rule the surface world as well and to that end has kidnapped Betty Ross. He tries to blackmail General Ross with her captive. Rick Jones and the Hulk descend into Tyrannus’ underground lair and after a good tussle they manage to free her. Tyrannus returns to the pages of the Hulk in Tales to Astonish #80-81 and a battle with the Mole Man.

The second story is set in a remote Asian land (Lihasa) with a ruthless military dictator General Fang. The people of this small country can’t defend themselves and need help. The Hulk and Rick Jones to the rescue. There is a very short spirited battle and the Hulk wins. He deposits the defeated General Fang in the jungles of Formosa (now Taiwan) and re-joins Rick Jones and they head home. People saved. Mission accomplished. 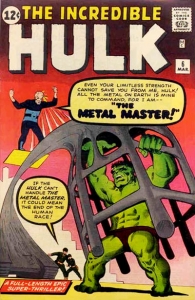 Our final story today features the alien villain the Metal Master and more physical changes for the Hulk.

In this issue the Metal Master arrives on earth seeking to rule it. He displays his powers to General Ross and the army an even KO’s the Hulk with a chunk of metal. He leaves and goes around the world showing off his powers of magnetism and metal dominance.

After the Hulk was knocked out the army captured the Hulk and caged him. The Hulk feels betrayed rick Jones once again. Rick leaves and summons for the first time the “Teen Brigade” to help. The Teen Brigade was a great idea. It brought normal non-super powered teens into the fray.

Looking back at these six issues it easy to spot some of the problems this series had. With the benefit of hindsight they spent far too much time trying to figure out what the Hulk was going to be. There was literally a change per issue. They also cast the main villain role to General Ross and the US army and didn’t develop and strong villains. The Betty Ross/ Bruce Banner love interest did start to take shape in issue #6. All of these were rectified over time in Tales to Astonish and his own series. New villains like The Leader and the Abomination and others arrived, and General Ross and the US army continued but usually in a supporting role. Rick Jones moved on. Most importantly the Hulk interacted heavily with the rest of the expanding Marvel universe both heroes and villains. The Incredible Hulk was here to stay.

There are not too many books I can say that I have gotten more wrong in terms of investing than the original Incredible Hulk run. I had multiple opportunities to buy the whole set, each time being advised just how rare and tough these books were to find in any grade by the comic shop owner, and each time I passed on the books. I had limited resources to spend and too many Amazing Spider-Man to collect. I know in my collector’s heart the minute I made any money on the Hulk books I would have cashed them in for something else I wanted or needed more. Cold comfort now!

The 46th Overstreet Price guide prices are listed below.

Remarkable to see the growth in value of Incredible Hulk #1 over time. High demand in all grades. Issues #2-6 are in heavy demand in high grade, but are not too hard to pick-up in lower grades at guide or better.

Summer does not seem to want to end, which is good by me. See you next month.