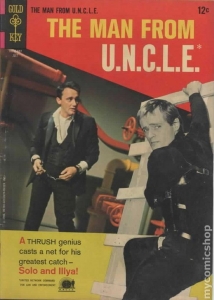 I’ve bought and sold a lot of comic books over the years and yet there are very few I regret selling.

Yes, there was that nice tight Tales of Suspense #39 I sold for $4,000 back in 1998, no exaggeration when I say it was an easy 9.4. But that lament is based on value and as long as I rolled that $4,000 into other books and kept doing that I might be almost just as far ahead.

The ones that really sting are based less on value and more on the joy of ownership. With many of these I realized my mistake only after I sold them.

A couple of years back my buddy Chris was leafing through some of the books in my collection. He stopped cold 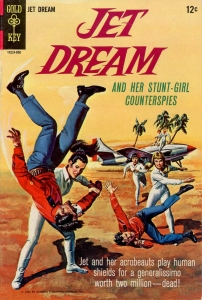 when he reached my beautiful high grade raw copy of Jet Dream #1. “Walt I’m buying this, how much”?

A week later I asked him if I could buy it back but there wasn’t a chance, he had already framed it and hung it up in his man cave.

Every time I visit Chris I have to make the trip down to the basement to enjoy what was once mine. It’s like Chris is giving me visitation rights, we always share a laugh about this book and I’ll admit it belongs more on the wall of Chris’s man cave that in a comic box in my basement.

The Jet Dream stories were 4 page back up stories starting from issue #7 running right through the last issue in the series #22 (though #21 and #22 were reprints of earlier issues).

Jet Dream and her stunt-girl counterspies were obviously influenced by Pussy Galore and her all female Flying Circus from the James Bond Goldfinger movie. The team consists of; 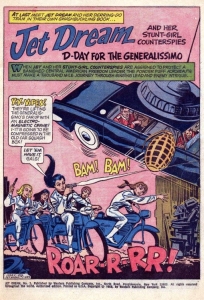 These stories were great fun and the nice 16 issue run makes for a great collecting strain and you can cap the Man from U.N.C.L.E. run with a Jet Dreams #1 which features a full 20 page adventure, just don’t expect Chris to get up off of his.

Man from U.N.C.L.E. #7 is an obscure mid 1960s 1st appearance of a beyond cool all girl espionage team, it can be had for cheap and it’s the type of book/run that can attract some niche demand with just a little awareness.