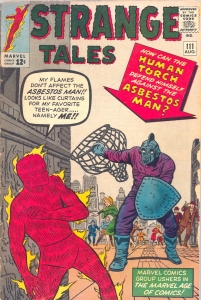 I was set up at a comic con this past weekend and had the pleasure of kicking back one evening with a few friends and a few too many drinks.

If anybody knows the importance of second appearances it’s me! My stunning Spotlight #79 broached the subject here at CBD and I’m not sure but I think it’s my most read Spotlight ever, what I am sure of is that it was the one I got beat up the most on.

So today I decided to take a collecting strain, early Marvel keys, and run a second appearance exercise. As is, which of these is the most undervalued? If all of these will eventually appreciate which has the most to gain? In order to pick I had to play them off against each other. With early Marvels I stuck with the 9 stalwart in continuity characters Spider-Man, Fantastic Four, Hulk, Ant-Man, Iron Man, Thor, X-Men, Doc Strange and Daredevil.

I took a peak at how their second appearance issues are doing and was able to decide that this week’s Undervalued Spotlight should shine on Strange Tales #111.

Of my 9 characters to compare I was able to toss 3 out right away because they were hard to compare against, Spider-Man #1 is seen as a key in its own right, Tales to Astonish #35 is inconclusive because some see #36 as the second appearance if you count the Ant-Man costume as the 1st appearance and not Hank Pym and the X-Men are not the same team today so the book is tough to judge.

Right away I’ll cede that FF #2 and Hulk #2 are the heavyweights and enjoy collecting community respect. I’ve always been uncomfortable with Thor, seeing him more as a direct adaptation of a character from ancient mythology in the public domain.

The Overstreet Price Guide has Strange Tales #111 as the cheapest of all 2nd issues on my list at $1,500 in the 9.2 grade. The later published and more plentiful Daredevil #2 has a Guide value of $1,950 in comparison.

In the end it comes down to the strength of the character and I’m convinced Doctor Strange belongs up there with the rest. Graded copies of Doctor Strange’s second issue are at this moment among the scarcest of all the second issues but for some reason the book lags in the marketplace.

As I’ve said before, issue #s will matter less and less in the future but fundamental facts like second appearances should end up mattering more and more.

On the market the book has fallen considerably since last summer but in my experience books like this usually lag after the movie hits. The thing to remember is that the movie was a hit, the character has been accepted into mainstream pop culture. If you can’t afford a Strange Tales #110 why not consider a nice tight copy of Strange Tales #111.