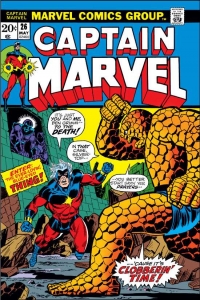 I was chatting with one of my pals at the shop the other day and he was telling me about a nice little comic pick up he had just made. War Is Hell #9 is the book he snagged, he told me it was hot book because of all the spec around Thanos, the Infinity Gauntlet and more specifically Death or at least it’s female manifestation that has Thanos all weak in the knees.

I think my rambling above serve as an excellent segue into this week’s Undervalued Spotlight Captain Marvel #26.

This whole Death concept is obviously not flushed out in this issue but this is where it starts, this is the issue where this character/entity is introduced later to be expanded on to the point where the character may be central to the whole Marvel cosmic movie saga.

Captain Marvel #26 has had some value for a while thanks to the Starlin/Thanos selling points.

I’ve seen a bit of movement on this book in very recent sales and that may obviously be the speculation setting in. The book is still plentiful raw and it may be a good idea to snag a few nice, crisp, tight copies.