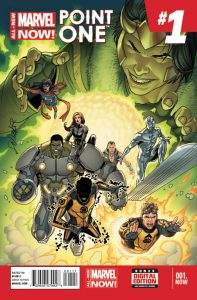 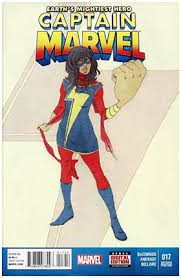 We had a big sale at the shop this past weekend and I was stationed in the back, in the old comics section. It was a busy area of the store with lots of back issue fans pouring in to scoop up some deals. The best part of working “old man alley”, as the others at the shop like to call it, is that I get to talk comics with lots of knowledgeable comic collectors.

I got into a conversation with one very savvy buyer about the future direction of collecting, we shared our opinions on what will wax and what will wane. My friend was very high on Ms. Marvel, the new Ms. Marvel to be more specific and he pleaded a very strong case, strong enough to convince me to feature All New Marvel Now! Point One #1 and Captain Marvel #17 (2nd print) as this week’s Undervalued Spotlight(s).

All New Marvel Now! Point One #1 previewed some upcoming new Marvel series including Loki, Surfer, Black Widow and the reason for this Spotlight Ms. Marvel.

I’m gonna be honest and tell you I forgot most of the details of our discussion, the issue numbers he was high on escaped me when I went to start this Spotlight so I had to go online and dig for what info I could get to best inform myself and pick the book or books I thought most of. The task wasn’t as straightforward as I thought, there was no “Hulk #1 is the 1st appearance of the Hulk” scenario.

All New Marvel Now! Point One #1 is featured on the Spotlight this week because it contains the 1st full appearance of Kamala Khan as Ms. Marvel.

Much press has been given to Marvel’s socially conscious push to update their stable of established characters by changing them into females or visible minorities. Debates and arguments erupted on line between traditional fans that preferred Marvel stick to tradition and newer fans ready to embrace change.

The thing was that the traditional fans were dropping off quicker than new fans were jumping on and sales suffered, they suffered so much Marvel had to publicly renounce much of the change and promise a more traditional line up. The re-focus is going on now as I type this so we shall see how it all plays out.

My point in picking Point One #1 this week is that this change Marvel started is inevitable, it’s healthy and though it may have been pushed too fast and too soon it is a change for the better. The funny thing is that not all the changes will work and that is a normal thing, we’ll vote with our interest and with our wallets as to which changes will work and which won’t.

I’m betting on Kamala Khan as Ms. Marvel to be one of the changes that works, I’m betting on her becoming an importance character in the Marvel Universe.

I added Captain Marvel #17 Second Print because it is the 1st depiction of Kamala Khan as Ms. Marvel. Covers are becoming such a driving force in market value that I had to add this issue in, I may not have 4 or 5 years ago. The fact that it is a second print offers some scarcity protection as well. This is not an easy book, I saw 3 9.8s available on line as of this post.

Fans, collectors and investors in Kamala Khan as Ms. Marvel also must choose between several comics that represent 1sts for the character.

When I look up 1st appearance of Kamala Khan I’m directed to Captain Marvel #14 (the 2012 series). I jumped on comics.org to get the skinny on the issue and there is no mention of Kamala in the story outline. I did a bit more digging and realized she just appears in one panel as an anonymous bystander admiring the exploits of Captain Marvel. I’m thinking lame and I don’t like it, there is not enough there to hang your toque on. A few issues later in Captain Marvel #17 we see Kamala in her apartment getting inspired by Captain Marvel and flexing some muscle, so this is Marvel pushing forward what they started in issue #14 and leading us to the eventual introduction of Kamala Khan as Ms. Marvel in All New Marvel Now! Point One #1. Again, a bit bigger cameo but not the book I’m looking for.

Here’s where the twist comes in, Marvel did a second print for Captain Marvel #17 featuring Kamala Khan dressed as Ms. Marvel on the cover. No mention to the character was made inside though. As I mentioned above, I think this book belongs in the pile.

The fundamentals are there in Point One #1, when the character really latches on to popular culture this will be a book to own and I just can’t ignore the power of the cover to the second print or Captain Marvel #17. With CGC encapsulation relegating comics to just covers I feel this is a good one to add beside the Point One.

Reasons to buy these comic books as an investment.