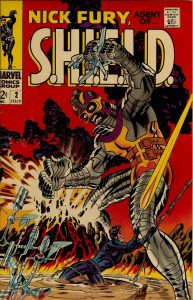 Remember the old comic book axiom to always sell off your movie related comics before the movie hits. Well Fantastic Four #52 is proving this wrong with strong after film sales results. The strength of the film tells only part of the story, another part is the weight of the Panther character himself. I’m sure values would not be as high if we all loved the movie but were indifferent to the book’s/character’s contribution to today’s diverse comic book landscape.

This diverse landscape has created lots of unique collecting strains with one of the most obvious being key issues for black characters since Fantastic Four #52 (Since 1965’s Lobo #1 really). Hot sellers at cons for me over the past couple of years have been books like Luke Cage #1, Power Man #24, Captain America #117 and obviously Fantastic Four #52. Gah! I has a CGC 8.0 Fantastic Four #52 and thought I was smart letting it go for a grand a few months before the movie hit, it’s almost double that now!

This week I’d like to shine the Spotlight on a book that belongs near the top of the heap for this relatively new but very healthy collecting strain of key comics featuring African American characters and that book is Nick Fury #2.

Nick Fury #2 features the 1st appearance of Centurius (AKA Nobel Prize winning Dr. Noah Black). Centurius has the distinction of being the 1st African American villain in Marvel Comics. These are early years for black characters in Marvel and in comics in general, Nick Fury #2 predates Captain America #117 (1st Falcon) by over a year.

I will grant you that Centurius is not a major character but he’s still around, he was recruited by Luke Cage into the Thunderbolts alongside the likes of Boomerang and the Shocker. The books importance lies in it introducing Marvel’s 1st black villain and it’s that fact that should see it added to books needed for key issues in this strain of collecting.

Nick Fury #2 does add more, the issue was written and gorgeously drawn by Jim Steranko one of the giants of the industry and although the cover is not a classic Steranko cover it is very strong and dynamic with our principal character all huge and dominating the cover.

The markets are indifferent at best to this book, recently a CGC 9.4 sold for $95 while a CGC 9.2 sold for $55 last summer. Nick Fury #2 was nothing for so long, it will take some time and some awareness for this book to catch on but I think it will.