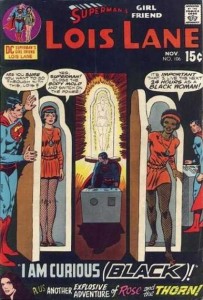 In the late 60s and early 70s comic books were tackling some very important social issues. The Amazing Spider-Man and Green Lantern ran some very controversial drug use stories. Famously the Amazing Spider-Man issues #96-#98 did not receive approval from the Comics Code Authority and these issues are now known as “the drug issues”. Titles like Lois Lane and Wonder Woman were exploring women’s equality issues, Aquaman comics touched on ecological issues and titles like JLA ventured into the subject of world peace. It was a great era to be reading comic books.

Racial equality in America was especially relevant at this time. The Civil Rights movement had won many victories in the courts and through enacted laws but actual change in society lagged behind. Lois Lane #106 explored the issue of race relations in a very direct way.

– The most collected era of the Lois Lane title