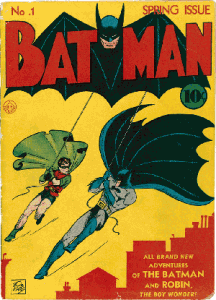 For me Batman #1 delivers a lot. The comic outperforms two other notable title launches in several ways. A quick look at the credentials of Batman #1 vs. those of Superman #1 and Amazing Spider-Man #1 highlights just how important the first issue of Bats is. Pick up a copy of the Overstreet Price Guide and read up on the above issues, I’m sure you’ll agree that Batman #1 brings the most to the table. The Joker’s first appearance will trump J.J. Jameson any day. The first female villain in comics is nothing to sneeze at either. The introduction of the Cat, later called Catwoman, is historically more significant than the intro of the Joker. The Joker though, is probably the most famous villain in all of comics. Batman #1 is also the launch of Batman’s flagship title and is easily one of the most collected titles in all of comics.