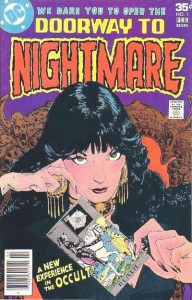 Inspired by the Sorceress Nimue of the Camelot legend the immortal Madame Xanadu reads Tarot cards, tells fortunes and delves into all things mystic and supernatural. She picked up the Madame Xanadu handle while in the service of the great Khan of Xanadu.

Very sexual in nature she’s had many affairs over the eons, both lesbian and straight and she’s factored into the development of DC characters as diverse as Zatanna, the Phantom Stranger and the Spectre.

Madame Xanadu first appeared in Doorway to Nightmare #1, (2/78). Artist Val Mayerik and writer David Michelinie developed the character based on Mike Kaluta’s expansions of the premise of the unnamed host character from DC’s Forbidden Tales of Dark Mansion.

Doorway to Nightmare was the last of the DC Mystery titles in the 1970s that included Dark Mansion of Forbidden Love, Tales of Ghost Castle, the aforementioned Forbidden Tales of Dark Mansion and several others. This mini genre of DC Comics Mystery/Supernatural books is highly collectible and can trace its origins back to the late 1960s when House of Secrets (#74) and House of Mystery (#181) changed to the Mystery format. Some view this Mystery line of DC’s as the seed for the future DC Vertigo line.

The 40th edition of the Overstreet Price Guide shows $18 at the 9.2 grade.