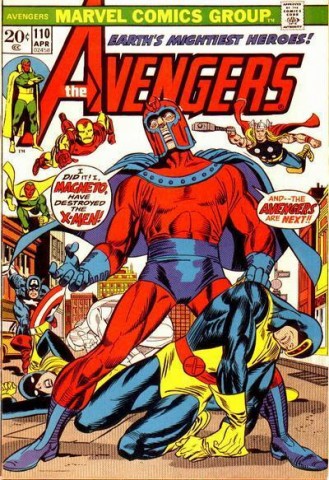 For Marvel Comics the X-Men were THE comic story of the second half of the 1970s. The new team that launched in X-Men #94 (8/75) slowly but surely began taking over the comic book world. At one point years later Marvel’s ‘X titles’ owned the sales charts!

There are a lot of X-Men fans out there and many are becoming more and more interested in these ‘lost years’. Fans are trying to track down and collect new original X-Men stories that were published during this time.

I’d love a more complete list of X-Men cameos and guest appearances during these ‘lost years’ so please note any issues you remember in the comments field below.

In Avengers #110 you not only get the X-Men but you also get their main villain Magneto. By the way, the awesome Gil Kane cover which features Magneto, the X-Men, Thor, Captain America and Iron Man adds even more appeal to this comic book. I read the issue again and it was a great, fun refreshing read. Steve Englehart gets writing credit while Don Heck gets credit for the pencils.

Surprisingly this book has been underperforming on the market. The supply is solid with 88 copies available at grades 9.2 or better. The demand seems soft though, the last recorded CGC 9.2 graded copy sold for $74 while the last CGC graded 9.4 copy sold for $86, heck CGC 9.6s are not even getting $150.

I see good potential for this comic. The Avengers as a title is on a rise that will only accelerate as we draw closer to next year’s movie. I have to remind you that Captain America, Thor and Iron Man are Avengers in this issue! These X-Men ‘lost years’ are a very interesting period for the team and more X-Men collectors should be drawn to the team’s guest appearances in other titles during this time, especially when articles like this one help spread the word.