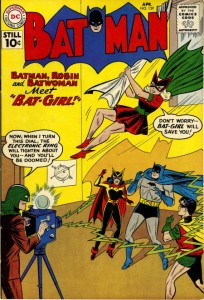 I’ve honestly had this book on my “future undervalued’ file for at least 6 months and have just never pulled the trigger and posted it. In light of the new Batgirl #1 comic released September 7th getting $10 on eBay I thought the timing was right.

Now the natural pick here would have been Detective Comics #359 (1/67) since it features the first appearance Barbra Gordon, aka the Oracle and now thanks to the new DC 52, Batgirl again. Though a good solid collectible I find its price is realized ($525 in the 9.2 grade in this year’s Overstreet). Remember that in 1967 Batman print runs were about double those of Batmans from 1961 thanks mostly to the success of the mid 60s Batman TV series. The Batman TV show drove up demand for the title quite dramatically. Indecently the Barbra Gordon Batgirl was created by DC at the request of the TV execs looking to add some female characters to the show. The Batman editor of the time, Julius Schwartz, had actually cancelled the silly and meddlesome Batwoman and Batgirl back in 1964. Great stuff.

This week’s pick actually involves 2 comics, Detective Comics #233 and Batman #139. And as we’re about to see, these two comics are tied together for the most delicious of reasons.

First let me explain why I picked Batman #139 over Detective #233. Detective Comics #233 (7/56) features the 1st appearance of Batwoman and as we’ll see how its publication ultimately lead to Batman #139 in the paragraphs below. The Detective #233 Overstreet Guide value of $3,000 is I feel fully realized and I don’t think the issue sparked a character as strong as the character created in Batman #139. So there.

Betty Kane was the Bat-Girl introduced in the 8 page story scripted by Bill Finger and penciled by Sheldon Moldoff in Batman #139 and she was to be a romantic interest for Robin, the Boy Wonder.

To understand the significance of this comic we have to delve into the persistent and prevalent shadow that hung over the Dynamic Duo in the mid 1950s. Were Batman and Robin gay? Gay? Yeah, were they gay?

We’ve all seen the comic panels floating around the internet (often taken out of context) and many of us have read at least an article or two on the subject and well there certainly was a body of evidence at least insinuating gay now wasn’t there.

The real trouble started in the mid 1950s when one Dr. Frederic Wertham, the famous psychiatrist that lead the crusade to clean up the comic book industry to make it safer for kids, actually accused the Dynamic Duo of being gay. Dr. Wertham is of course the author of the Seduction of the Innocent (SOTI) and it was his efforts that helped usher in the Comics Code.

Dr. Wertham’s accusation was taken quite seriously by the U.S. government especially Senator Estes Kefauver who headed the Senate Sub-committee on Juvenile Delinquency.

In the pages of SOTI Dr. Wertham claimed that the “… stories are psychologically homosexual.” He went on that this “…type of story may stimulate children to homosexual fantasies…” Then he adds that “only someone ignorant of the fundamentals of psychiatry and the psychopathology of sex can fail to realize a subtle atmosphere of homoeroticism which pervades the adventures of the mature Batman and his young friend Robin” Even literary critic Mark Best noted “Wertham did correctly identify the possibility of a queer reading of the superheroes…”

DC took note and fearing a parent backlash the publisher went about trying to make Batman and Robin lady’s men by introducing female versions of the Batman character for the Dynamic Duo to romance! I swear I’m not making this stuff up.

Batman #139’s introduction of Bat-Girl was meant to dispel the gay Robin myth. Luckily for us it spawned a great female character that once tweaked has turned into a key player in today’s DC Universe.

The first appearance of the Betty Kane Batgirl in Batman #139 is also a very tough book to find in nice shape. The CGC census shows only 5 graded at 9.0 or better while the 1st Barbara Gordon Batgirl in Detective #359 is comparatively plentiful at 35 graded copies at 9.0 or better.

Undervalued when compared to Detective Comics #233 and #359