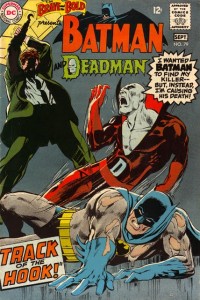 Neal Adams knew something was wrong with Batman even during the absolute height of the character’s popularity. In a panel at the 2010 San Diego Comic Con (with excerpts reprinted in a recent Back Issue Magazine) Adams recalled his frustrations with the campy schlock that was Batman in 1968. Adams fondly remembered a darker more dangerous Batman “usually he’s out at night, usually he’s doing some terrible things and he scares people. This guy (TV Batman) was telling jokes”

There was no denying the success the campy Batman was enjoying though. In the late 1960s the hugely popular Batman TV show was spilling over into record monthly comic sales. DC Editor Julius Schwartz couldn’t have been happier.

Neal Adams actually approached Mr. Schwartz a few times basically confronting his boss on what Batman had turned into. “Well, its selling comics” was the reply Adams got. Schwartz would not let Adams onto the Batman of Detective titles, if it ain’t broke, don’t fix it.

As simple as that. Neal Adams had just set the taking back of Batman in motion.

A few months later, after Adams had done about 3 issues of Batman in Brave and the Bold Julius Schwatz stopped Adams in the halls of DC and asked “Why are all these letters saying the only Batman at DC Comics is in Brave and Bold?”

Actual letter I dug out of Brave and Bold #82

Brave and the Bold #79 represents one of those pivotal moments in comic book history, certainly a pivotal moment in the history of Batman. It was a moment that started a movement with other great moments (one of which I have lined up for a future Undervalued Spotlight) and this movement back to a darker Batman eventually led to the publishing of the greatest Batman stories ever told!

Brave and the Bold #79 boasts a penciled and inked cover by Neal Adams. The 23 page story is scripted by Bob Haney, pencils and inks are by Adams.